David Legge Brainard (December 21, 1856 – March 22, 1946) was an arctic explorer and United States Army officer who fought in the American Indian Wars, the Spanish–American War, and World War I.

Brainard was born in Norway, New York, the fifth son of Alanson Brainard and Maria C. Legge. He attended the State Normal School in Cortland, New York, and then decided upon a military career.

Brainard enlisted in the 2nd Cavalry Regiment in September 1876, serving at Fort Keogh, Montana Territory during the Great Sioux War of 1876. On May 7, 1877, Brainard fought in the Battle of Little Muddy Creek, Montana, where he was wounded in action in the face and right hand. He also served during the Nez Perce War and Bannock War of 1877 and 1878 under Colonel Nelson Appleton Miles, in Montana.

In 1880, he volunteered and was selected for the Howgate expedition, which was canceled. However, the next year he was detailed as first sergeant for the ill-fated Lady Franklin Bay Expedition under Adolphus Greely. Over the three years of this expedition he continuously kept a journal.

Among the men to die on this expedition was James Booth Lockwood, second-in-command of the expedition and Brainard's companion on many excursions, including their record breaking push north to latitude 83°23 '30". Brainard wrote:

Lieut. Lockwood became unconscious early this morning and at 4:30 p.m. breathed his last. This will be a sad blow to his family who evidently idolized him. To me it is also a sorrowful event. He had been my companion during long and eventful excursions, and my feeling toward him was akin to that of a brother. Biederbick and myself straightened his limbs and prepared his remains for burial. This was the saddest duty I have ever yet been called upon to perform.

Shortly before rescue, in the spring of 1884, freezing, starving, and suffering from scurvy, he wrote: "Our own condition is so wretched, so palpably miserable, that death would be welcomed rather than feared ..." Brainard was one of only six survivors rescued by Rear Admiral Winfield Scott Schley on June 22. On that day, he was reportedly too weak to hold his pencil to make a note in his log.

He was awarded the Back Grant by the Royal Geographical Society in 1885. 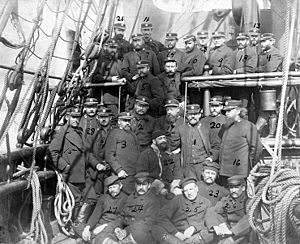 Survivors of the expedition

Brainard was commissioned second lieutenant in the 2nd Cavalry in 1886 "as recognition of the gallant and meritorious services rendered by him in the Arctic expedition of 1881–1884." He then had the distinction of being the only living (active or retired) officer in the US Army commissioned for specific services.

He served as chief commissary of the military forces in the Philippines during the Spanish–American War in 1898. Brainard was a charter member of, and actively involved in, The Explorers Club, serving as its fourth president from 1912 to 1913.

He was elected an honorary member of the American Polar Society in 1936, on his 80th birthday. Brainard married twice, first to Anna Chase in 1888, then to Sara Hall Guthrie (1880–1953) in 1917, leaving no children and one stepdaughter, Elinor, from his second marriage. Brainard died, aged 89, on March 22, 1946, and was buried in Arlington National Cemetery, joined by his second wife in 1953. He was the last survivor of the Greely Arctic Expedition.

All content from Kiddle encyclopedia articles (including the article images and facts) can be freely used under Attribution-ShareAlike license, unless stated otherwise. Cite this article:
David L. Brainard Facts for Kids. Kiddle Encyclopedia.