Denmark is a village in Brown County in the U.S. state of Wisconsin. The population was 2,123 at the 2010 census. It is part of the Green Bay Metropolitan Statistical Area. The village is located within the town of New Denmark.

Denmark began to be settled by Danish immigrants in 1848, and has been referred to, along with Hartland, Wisconsin, as the "nuclei of what developed into one of the most important regions of Danish immigration in the United States."

In 1846, a Prussian immigrant, John Bartlme, purchased 40 acres of land in the area of what is now Denmark.

In 1848, the second settler, and the first Danish immigrant, a man named Niels Gotfredsen, bought 160 acres in the area. He and his wife were referred to as the 'King and Queen of Denmark', because they were the first Danish settlers of the town of Denmark.

In 1854, the residents of Brown County, Wisconsin voted on whether Green Bay or De Pere would be the county seat.This was also the year that the residents of Denmark wanted to build a church, but they did not have any money. A man from De Pere came to the town, and offered to pay two dollars for every vote the people of Denmark would cast in favor of De Pere.

On election day, 15 men and boys from Denmark turned out to cast their votes for De Pere, and the town was given $30. But instead of building a church, as was originally intended, the town built a school.

In 1871, Hans Beyer immigrated from Denmark, Europe to New York City, from which he traveled to Green Bay. From Green Bay, Beyer traveled seven hours by ox team to get to Denmark. In 1875, Beyer opened a store in Denmark, which was the first business in the new town, using a loan of $200. In 1896, Beyer built a new store and cheese factory next to the old store.

Turn of the Century

In 1906, the Chicago & Northwestern railroad was built through the village. The depot was built in the downtown area. The railroad was originally planned to travel through Cooperstown, Wisconsin, rather than Denmark, but railroad officials decided against this plan.

On June 15, 1915, the town of Denmark held a special election of the issue of incorporation. The official vote tally was 109 in favor, and 26 against. Later that year, the Denmark was officially incorporated into a village.

On March 3, 1949, Denmark State Bank was robbed of $38,000 at gunpoint. This was the first bank robbery in Brown County, Wisconsin. The Federal Bureau of Investigation became involved, and the perpetrators were caught over the next few weeks.

The last passenger train to come through the village was on April 30, 1971.

In 1996, Wisconsin Central Ltd., which had bought the train line from Chicago & Northwestern, abandoned the tracks between Denmark and Rockwood, Wisconsin The abandoned rail line was converted into the Devil's River State Trail, which was completed in 2013.

According to the United States Census Bureau, the village has a total area of 1.93 square miles (5.00 km2), all of it land.

Denmark has a humid continental climate (Köppen climate classification Dfb), with some moderation due to the village's proximity to Lake Michigan.

There were 923 households, of which 31.9% had children under the age of 18 living with them, 44.7% were married couples living together, 11.4% had a female householder with no husband present, 4.8% had a male householder with no wife present, and 39.1% were non-families. 32.5% of all households were made up of individuals, and 13.6% had someone living alone who was 65 years of age or older. The average household size was 2.30 and the average family size was 2.94.

The Denmark Historical Museum is located downtown in the basement of the BMO Harris Bank branch. 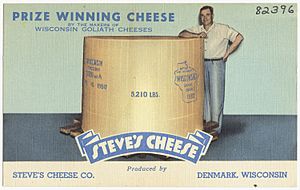 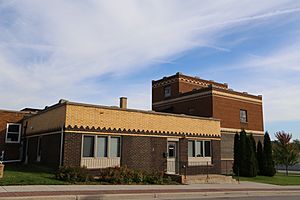 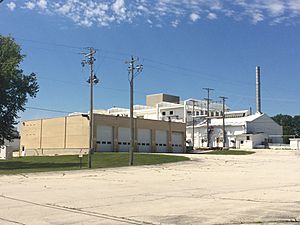 In 1896, Hans Beyer built the first cheese factory in the village. The factory employed two people, and handled between 7,500 and 8,000 pounds of milk per day. In 1899, Beyer sold the cheese factory, as well as his general store, because of his failing health.

In 1912, the Danish Prize Milk Company was founded. In 1926, Pet, Inc. acquired the plant. In 1946, Blue Moon Foods acquired the plant, and converted its production to cheese, marketed under the brand name of 'Gold-N-Rich'. In 1949, the plant was purchased by Lake to Lake Dairy Cooperative, and began producing cheddar cheese. Under their ownership, the Denmark cheese plant became the second largest cheddar cheese producer in the state. In 1982, Lake to Lake merged with Land O' Lakes. In 2014, Land O' Lakes closed the Denmark cheese plant.

The village of Denmark is served by the School District of Denmark, which consists of:

All Saints Catholic School is also located in the village, serving grades 4k-8.

The village provides sewer and water service to residents. The village owns and operates the Denmark Wastewater Treatment Plant, which was built in 1980.

All content from Kiddle encyclopedia articles (including the article images and facts) can be freely used under Attribution-ShareAlike license, unless stated otherwise. Cite this article:
Denmark, Wisconsin Facts for Kids. Kiddle Encyclopedia.