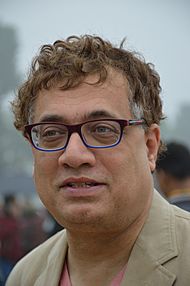 Derek O’Brien (born 13 March 1961) is an Indian politician. He is also a quiz master. He is Member of Parliament in the Rajya Sabha (Upper House of India's Parliament) from West Bengal. He is also a member of the All India Trinamool Congress Party. He is the leader of the All India Trinamool Congress Parliamentary party in the Rajya Sabha. Other than to his Parliamentary career, he became well known as the quizmaster for the Bournvita Quiz Contest and other shows.

All content from Kiddle encyclopedia articles (including the article images and facts) can be freely used under Attribution-ShareAlike license, unless stated otherwise. Cite this article:
Derek O'Brien (politician) Facts for Kids. Kiddle Encyclopedia.