Descendants of Charles II of England facts for kids 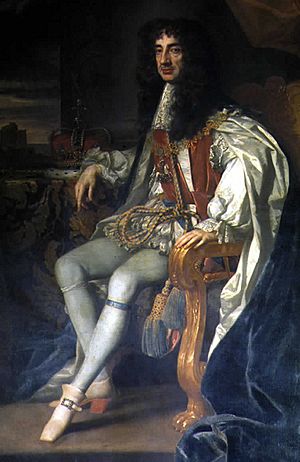 Although some of Charles' children made claims to the throne, most notably his first son James Scott, 1st Duke of Monmouth, their illegitimacy meant that after Charles' death, his brother James, Duke of York became king instead. Over the years several of Charles' senior descendants have made names for themselves, including Augustus FitzRoy, 3rd Duke of Grafton who became Prime Minister of Great Britain, cricket pioneer Charles Lennox, 1st Duke of Richmond, parliamentary reformer Charles Lennox, 3rd Duke of Richmond.

Diana, Princess of Wales was descended from two of Charles' illegitimate sons; Henry Fitzroy, 1st Duke of Grafton and Charles Lennox, 1st Duke of Richmond. This means should her son Prince William, Duke of Cambridge take to the British throne as he is expected to, William would become the first blood descendant of Charles II to do so. Though William is part of the royal House of Windsor, rather than the House of Stuart.

See also: Duke of Monmouth, Earl of Dalkeith, Duke of Buccleuch, and Duke of Queensberry

Catherine Pegge and Charles II also had a daughter together called Catherine FitzCharles but she died young or became a nun.

Barbara Palmer, 1st Duchess of Cleveland was perhaps the most notorious of Charles' mistresses. Some of the children claimed by Palmer as belonging to Charles are in doubt. Anne Lennard, Countess of Sussex was claimed to be Charles' and he recognised her, though some sources regard Roger Palmer as her father. Palmer claimed Lady Barbara FitzRoy was Charles' daughter, however he never recognised her and most sources consider John Churchill, 1st Duke of Marlborough her likely father. Palmer and Charles had a daughter together Charlotte Lee, Countess of Lichfield and three sons who were recognised by Charles, their lines are featured below.

See also: Duke of Southampton, Duke of Cleveland, and Earl of Darlington

See also: Duke of Richmond, Duke of Lennox, and Duke of Gordon

The two had one daughter; Lady Mary Tudor. Mary went on to marry Edward Radclyffe, 2nd Earl of Derwentwater; after Edward's death, she married Henry Graham, and upon his death she married James Rooke.

All content from Kiddle encyclopedia articles (including the article images and facts) can be freely used under Attribution-ShareAlike license, unless stated otherwise. Cite this article:
Descendants of Charles II of England Facts for Kids. Kiddle Encyclopedia.