Kids Encyclopedia Facts
This page is about the town in South Yorkshire. For other uses, see Dinnington (disambiguation).

Dinnington is a town in South Yorkshire, England. It is part of the Metropolitan Borough of Rotherham, as a border town, it is almost equidistant from Sheffield to Rotherham, and about 5 miles (8 km) from Worksop.

Excavations show Dinnington to have been inhabited since at least Neolithic times, and it has been suggested that the settlement takes its name from a local barrow, though a more traditional interpretation of "Dinnington" would be "Dunn's Farmstead", or "Town of Dunn's People".

Dinnington was originally a small, isolated farming community, based around the New Road area of the town. Quarrying in the area helped expand the population, but it was the sinking of the Dinnington Main Colliery in 1905 that led to the real growth of the settlement. The census of 1911 shows a twenty-fold increase in population since 1901, from 250 to 5,000.

The coal miners initially lived in a prefabricated shanty town in Laughton Common, colloquially known as tin town but later moved into colliery-built terrace houses around the central shopping area of Laughton Road.

Dinnington continued to expand throughout the 20th century, largely through the growth of commuter living that followed the Second World War. As the housing estates spread, Dinnington began to merge seamlessly into the neighbouring settlements of Throapham and North Anston. The result is a 2.2 miles (3.5 km) strip of urban development that mainly acts as a commuter base for Sheffield, Rotherham and Worksop, although with closure of coal and then steel industries, the area has seen a rapid decline in the late 1980s and early 1990s and despite steady growth, still boasted the highest level of unemployment in the UK in 2001.

Dinnington Colliery was closed in 1992. This damaged the local community, and had a large negative impact on the local economy with initial job losses and knock-on effect closures to local business.

In 1995 Dinnington was featured in an episode of the BBC1 TV documentary series Everyman, entitled Simon's Cross. The programme described the life of Dinnington parish priest, the Rev Simon Bailey, detailing his life, work and reflections while living with AIDS, and the way members of the parish of Dinnington came to terms with it and supported him. Scarlet Ribbons: A Priest with AIDS, an account of his story, was written by Simon Bailey's sister, Rosemary Bailey and published by Serpent's Tail in 1997.

In 2003 Dinnington was declared a town as part of an attempt to attract more investment and improve the local economy.

Controversy arose in the village over plans to redevelop the Miners' Welfare. The Welfare buildings and sports fields were provided originally for the miners at the local colliery by CISWO in 1926. The property had been leased to Rotherham Borough Council and was used for Safe@Start programmes up until 2007. It has remained empty since that date and has been subject to vandalism and lack of repairs. Controversy over development resulted in the formation of a local residents' group opposing the development plans and asking for the regeneration of the site as an amenity for local people.

Dinnington had a population of 9,077 in the 2011 census, which makes it slightly larger than Wath-upon-Dearne. Here are the three areas known as Dinnington. 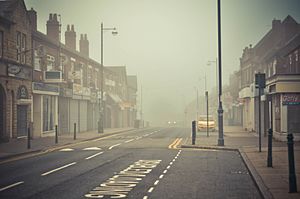 Dinnington, in the fog.

Dinnington's two further education establishments are Rotherham College of Arts and Technology and the sixth form at Dinnington High School.

Blastrac UK, the road surface specialists, are based in the town.

EDLounge Ltd, an e-learning and adult qualifications company was created in and is based in Dinnington. www.edlounge.com

All content from Kiddle encyclopedia articles (including the article images and facts) can be freely used under Attribution-ShareAlike license, unless stated otherwise. Cite this article:
Dinnington, South Yorkshire Facts for Kids. Kiddle Encyclopedia.