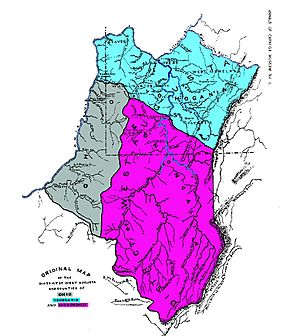 Map of the District of West Augusta and the three counties formed from it in 1776.

The District of West Augusta was a short-lived (1774–76) historical region of Colonial Virginia that encompassed much of what is now northern West Virginia and southwestern Pennsylvania.

The area was sparsely populated in the years following the French and Indian War (1754–63), and neither colony made any serious attempts at forming a local government until the early 1770s. Virginia administered the region as a part of Augusta County, Virginia. Pennsylvania later established Westmoreland County with its seat at Hannastown, overlapping Virginia's claims.

Virginia's governor, Lord Dunmore, traveled to Pittsburgh, which Virginia claimed as part of its territory, to appoint government officials under the Virginia charter. In 1774, the Virginia assembly separated the western portion of Augusta County's territory and formed the District of West Augusta.

The preamble to a later act defined the boundaries of West Augusta as follows:

Beginning on the Alleghany Mountains, between the heads of the Potomac, Cheat and Green Briar Rivers (Haystack Knob, or north end of Pocahontas County);

thence up the said river, and the west fork thereof, to Bingerman's Creek, on the northwest side of the said west fork;

thence up the said creek to the head thereof,

thence in a direct course to the head of Middle Island Creek, a branch of the Ohio,

The following several years were contentious. Local officials from Virginia arrested their counterparts from Pennsylvania and vice versa. Each state made movements to stem settlers' coming in from the other state.

In 1776, the District of West Augusta was divided into three counties: Ohio County, Monongalia County, and Yohogania County. Ohio County encompassed most of the western region of the district bordering the Ohio River, including parts of what are now Washington and Greene Counties in Pennsylvania. Monongalia County encompassed much of what is now north-central West Virginia, and parts of what are now Washington, Greene and Fayette Counties in Pennsylvania. Yohogania County consisted of much of what is now southwestern Pennsylvania, including all of what is now Westmoreland County, Pennsylvania, parts of the present counties of Washington, Fayette, Allegheny, and Beaver, and the counties of Hancock County, West Virginia and the northern part of Brooke County, West Virginia.

In 1780, the boundary dispute between Virginia and Pennsylvania was finally settled when both sides agreed to extend the Mason-Dixon line westward from Maryland to 80° 31′ west, the current western border of Pennsylvania.

Most of Yohogania County became part of Pennsylvania; that section of its lands was divided between Westmoreland County and the newly formed Washington County in Pennsylvania; Beaver and Allegheny were later created from those counties. The relatively small part of Yohogania that remained in Virginia was subsumed into Ohio County. That area is now divided between Brooke County and Hancock County, Virginia (now West Virginia), which were later formed from Ohio County, at the northernmost tip of West Virginia's Northern Panhandle.

All content from Kiddle encyclopedia articles (including the article images and facts) can be freely used under Attribution-ShareAlike license, unless stated otherwise. Cite this article:
District of West Augusta Facts for Kids. Kiddle Encyclopedia.