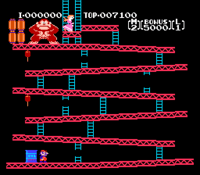 This is about the character. For other things, see Donkey Kong (disambiguation)

Donkey Kong is a Nintendo video game character. He was first in a video game in 1981. He is a large gorilla who lives deep in the jungles of his very own island. Since 1994 he has worn a red necktie with his initials "DK" in yellow, his only piece of clothing. He appears as both the hero and villain of the Donkey Kong games.

All content from Kiddle encyclopedia articles (including the article images and facts) can be freely used under Attribution-ShareAlike license, unless stated otherwise. Cite this article:
Donkey Kong Facts for Kids. Kiddle Encyclopedia.