Economy of Illinois facts for kids

The economy of Illinois is the fifth largest by GDP in the United States and one of the most diversified economies in the world. Fueled by the economy of Chicago, the Chicago metropolitan area is home to many of the United States' largest companies, including Abbott Laboratories, AbbVie Inc., Allstate, Baxter International, Boeing, Caterpillar, Conagra, Crate and Barrel, Kraft Heinz, McDonald's, CNH Industrial, GE Healthcare, Aon PLC, Willis Towers Watson, Mondelez International, Motorola, United Airlines, US Foods, Walgreens, and more. The Chicago area is a global financial center and headquarters a wide variety of financial institutions including Citadel LLC, CNA Financial, Discover Financial Services, Morningstar, Inc., Nuveen, and more. Chicago is also home to the largest futures exchange in the world, the Chicago Mercantile Exchange.

Across the state, other Fortune 500 world headquarters based in Illinois include State Farm in Bloomington and John Deere in Moline. As of 2017, Illinois ranked fourth in the nation for the most Fortune 500 based companies with a total of 36. For six consecutive years, Chicagoland was ranked the nation's top metropolitan area for corporate relocations.

The 2018 total gross state product for Illinois was $857 billion, placing it fifth in the nation. The 2017 median household income was $62,992, one of the nation's highest. In 2016, the nine counties of the Chicago metropolitan area accounted for 77.3% of the state's total wages, with the remaining 93 counties at 22.7%. The state's industrial outputs include machinery, food processing, electrical equipment, chemical products, publishing, fabricated metal products and transportation equipment. Corn and soybeans are important agricultural products. Service industries of note are financial trading, higher education, logistics, and medicine.

Most of the state of Illinois lies outside of the Chicago urban area and inside the North American Corn Belt. Corn, soybeans, and other large-field crops are grown extensively. These crops and their products account for much of the state's economic output outside of Chicago. Much of the field crop is remanufactured into feed for hogs and cattle. Dairy products and wheat are important secondary crops in specific segments of the state. In addition, some Illinois farmers grow specialty crops such as popcorn and pumpkins. The state is the largest producer of pumpkins among the U.S. states. There is a large watermelon growing area centered on Lincoln, Illinois. Illinois wine is a growing industry. In December 2006, the Shawnee Hills were named Illinois's first American Viticultural Area (AVA). 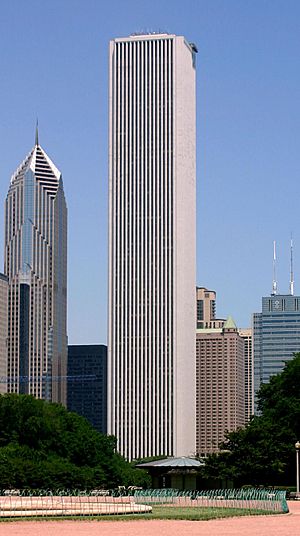 By the early 2000s, Illinois's economy had moved toward a dependence on high-value-added services such as financial trading, higher education, logistics, and medicine. In some cases, these services clustered around institutions that hearkened back to Illinois's earlier economies. For example, the Chicago Mercantile Exchange, a trading exchange for global derivatives, had begun its life as an agricultural futures market.

The Wall Street Journal summarized Illinois's economy in November 2006 with the comment that "Chicago has survived by repeatedly reinventing itself."

The Institute of Government and Public Affairs at the University of Illinois publishes a "flash-index" that aims to measure expected economic growth in Illinois. The indicators used are corporate earnings, consumer spending and personal income. These indicators are measured through tax receipts, adjusted for inflation. 100 is the base, so a number above 100 represents growth in the Illinois economy, and a number below 100 represents a shrinking economy. Data from the index, from 6/1981 to the present, can be found here.

All content from Kiddle encyclopedia articles (including the article images and facts) can be freely used under Attribution-ShareAlike license, unless stated otherwise. Cite this article:
Economy of Illinois Facts for Kids. Kiddle Encyclopedia.