Edmonson County is a county located in the south central portion of the U.S. state of Kentucky. As of the 2010 census, the population was 12,161. Its county seat is Brownsville. The county was formed in 1825 and named for Captain John "Jack" Edmonson (1764–1813), who was killed at the Battle of Frenchtown during the War of 1812. This is a dry county where the sale of alcohol is prohibited.

Edmonson County was established on January 12, 1825 from land given by Grayson, Hart and Warren counties. A courthouse built in 1873 replaced a former structure rendered unfit when its floor collapsed. 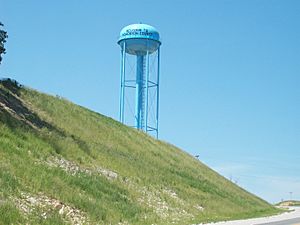 A water tower along KY101 welcomes visitors as they enter southern Edmonson County.

There are two main routes that form the major transportation corridors through Edmonson County.

KY 70 is the primary west to east route, traversing the width of the county.

KY 259 enters Edmonson County at the border with Grayson County, near the town of Bee Spring. The highway continues on, bridging the Green River (the only bridge over the river in Edmonson County), before intersecting with KY 101. KY 259 then branches off in a southeastern direction while KY 101 continues as the main north–south route through the county, exiting into Warren County just south of the community of Chalybeate.

Additionally, KY 185 is a north–south route connecting Bowling Green with points in Grayson County and points north which lie between. I-65 passes through the southeastern tip of the county, but has no interchanges allowing access to the road. I-65 parallels the older US 31W, which runs through a small southeastern portion of the county. 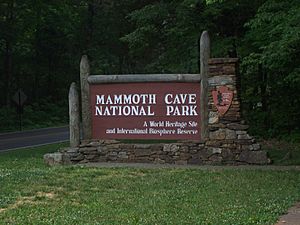 Located mostly in the northern part of Edmonson County, the Nolin Lake area was incorporated as a Kentucky State Park in 2001 and offers fishing and other recreational opportunities. 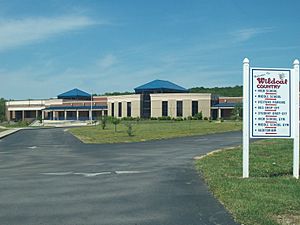 The combined Edmonson County High and Middle School complex is located in Brownsville.

All content from Kiddle encyclopedia articles (including the article images and facts) can be freely used under Attribution-ShareAlike license, unless stated otherwise. Cite this article:
Edmonson County, Kentucky Facts for Kids. Kiddle Encyclopedia.