Eek! The Cat facts for kids

Eek! The Cat (retitled Eek! Stravaganza in 1994) is an American-Canadian animated series, created by Savage Steve Holland and Bill Kopp and produced by Fox Kids and Savage Studios with animation by Nelvana. It ran from 1992 to 1997 on Fox's former Saturday Morning children's block Fox Kids, airing on YTV from 1992 to 1998 in Canada.

Eek! the Cat is about a purple cat named Eek whose motto is "it never hurts to help". This attitude generally gets him into trouble, from which much of the humor of the show is derived. Other characters include Eek!'s human family, with whom he cannot communicate via spoken language; Sharky the Sharkdog (his worst nightmare), and Eek's girlfriend, Annabelle.

The show featured a guitar riff intro, slapstick humor, and pop culture references. Shows vary from standard cartoon fare to movie spoofs (such as Apocalypse Now and A Clockwork Orange) and musical episodes; the first Christmas episode was written almost entirely in rhyme. The show featured many cameos by celebrities, some of whom came back for several episodes. 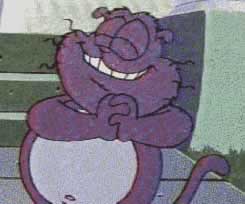 The Terrible Thunderlizards segment was introduced in the middle of the second season of Eek! The Cat. Like Eek!, this segment was also created by Holland and Kopp. It ran from November 20, 1993, to July 28, 1997. The show was originally intended to be a spin off from Eek! The Cat, but it aired as a weekly segment on Eek! Stravaganza.

Like Eek!, the segment was produced by Fox and Savage Studios with animation by Nelvana. The segment chronicled the misadventures of a trio of dinosaur mercenaries released from incarceration and charged with the task of eliminating two primitive human beings. Despite their superior size and firepower and the obliviousness of their targets, however, the mercenaries always fail with comedic results. When they are not after the humans, the Thunderlizards must protect Jurassic City from the Thuggosaurs.

The Klutter segment came in the fourth season of Eek! Stravaganza in 1995. It followed Ryan and Wade Heap and their pet Klutter, who they created from a pile of junk because their father's constant allergies made it impossible for them to have a real dog. There are other characters in the show, like Sandee Heap, who was lonely at first, before Klutter came into their lives. They went on mysteries, a la Scooby-Doo, to save animals and solve crimes.

Klutter ended in February 1996 with 8 segments. Unlike Eek! and Thunderlizards, the segment was created by David Silverman and Holland along with being animated by Film Roman.

The original idea for the show came from Savage Steve Holland's experience as a cat owner. One of his cats was named Eek. In an early design, Eek was colored pink instead of purple. The series was originally titled The Six and a Half Lives of Eek the Cat.

The show premiered on the now-defunct Fox Kids block in 1992 as Eek! The Cat. Thirteen 20 minute episodes were produced for its first season. A recurring character named Mr. Iwanter was a caricature of then-Fox Kids executive Sid Iwanter.

For the second season in 1993, the show's format was retooled (except It's A Very Merry Eek's Mas, which originally aired as a prime-time special). In each episode were two nine-minute segments. One was Eek! the Cat. The other was often The Terrible Thunderlizards. The Thunderlizards segments were intended to air at the start of the season, but it began two months later because of production delays. When they started airing, the series title was changed to Eek! And The Terrible Thunderlizards. Also, the creators originally intended to include two one-minute segments. The first would feature the Squishy Bearz, and the second one were to feature other characters from Eek!. However, because the show turned out to be too long, the one-minute segments were scrapped. In January 1994, Fox aired four Thunderlizards segments as two Thunderlizards specials.

During the season, Kopp left the show (though he still did the voice of Eek and others) for his own show, The Shnookums and Meat Funny Cartoon Show for Disney, which would later own Eek! as well.

For the third season in 1994, the name was changed once again to Eek! Stravaganza, keeping the same format that was used in the second season.

In the fall of 1995, another segment called Klutter was added, rotating with the Thunderlizards. This segment lasted a year. Kato Kaelin was originally scheduled to be a guest voice in an episode, but the Fox network refused.

Fox canceled Eek! Stravaganza in November 1996, though they eventually aired the final episodes in the summer of 1997.

Most episodes of Eek! Stravaganza were then re-run from August 1998 to April 1999 on Freeform, back when it was called Fox Family.

For years, all that was available commercially was a single VHS tape with the episodes Catsanova and HawaiiEek 5–0 on it. It was released in 1995. On July 23, 2001, Eek! and other properties of Saban Entertainment were sold to The Walt Disney Company. As of 2017, no word from Disney has been spoken about releasing the series to DVD in North America. Twelve DVD volumes have been released by Jetix in the Czech Republic under the title "Kocour Raplík", another Jetix DVD for Russian markets under the title "Кот Ик", and four Hungarian Jetix DVDs under the title "Nyekk a Macska".

Several episodes of the series used to be available to watch on the ABC Family website and was also seen on the Jetix and Jetix Play channels in some parts of Europe.

Celebrities made cameo appearances as themselves on the show, unless otherwise noted. (Also, Bill Kopp and Savage Steve Holland appeared as themselves in the show.)

An Eek! The Cat video game was released for the Super NES in 1994.

All content from Kiddle encyclopedia articles (including the article images and facts) can be freely used under Attribution-ShareAlike license, unless stated otherwise. Cite this article:
Eek! The Cat Facts for Kids. Kiddle Encyclopedia.