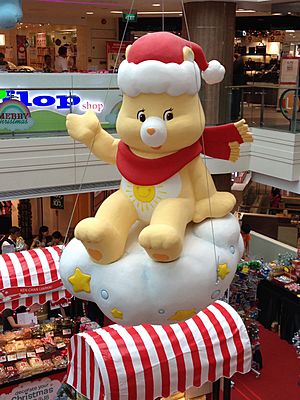 Funshine Bear as part of the Christmas decoration in Junction 8, Singapore in Dec 2013.

The Care Bears are a very successful toy franchise from the 1980s. Over forty million of these stuffed teddy bears, made with a variety of colours, were sold from 1983 to 1987. Each Bear had a name, a job, and a symbol tied to it. For example, Funshine Bear helps people wake up, and has a sun on his stomach.

The toys were first made as characters on cards in 1981; the original artwork was done by Elena Kucharik. Later, other toys called the Care Bear Cousins were introduced.

They also gave way to three animated movies for the cinema in the mid-1980s. A related TV series from DIC and, later, Canada's Nelvana Limited came out at almost that same time.

Recently, Care Bear toys have been brought back in a new edition for the twenty-first century. As part of this comeback, the Bears have appeared in their first two DVD movies (both computer-animated), as well as a few video games.

Care Bears in other languages

All content from Kiddle encyclopedia articles (including the article images and facts) can be freely used under Attribution-ShareAlike license, unless stated otherwise. Cite this article:
Care Bears Facts for Kids. Kiddle Encyclopedia.