The Terrible Thunderlizards facts for kids

The Terrible Thunderlizards is a segment that aired in Canada on YTV and in the United States as part of Eek! Stravaganza on the Fox Kids programming block. It aired from November 20, 1993 to July 28, 1997. The series was originally intended as a spin off from Eek! The Cat. The segment was supposed to air at the start of Eek's second season in September 1993, but due to production delays, it began in November. Like Eek!, the segment was also a co-production of Nelvana and Fox Kids in association with Savage Studios Ltd. Dee Snider, from the band Twisted Sister composed the show's theme song.

The series chronicled the misadventures of a trio of dinosaur mercenaries released from incarceration (for being falsely accused of helping an enemy Thuggosaur in a time of war) and charged with the task of eliminating two primitive human beings after scientists realize that if humanity is allowed to multiply it will mean the end of dinosaur supremacy. However, despite their superior size and firepower and the obliviousness of their targets, the mercenaries always fail to kill the humans with comic results. Their usual preferred method of attacking the humans was throwing bombs full of bees, which upon impact would usually then go after the dinosaurs; forcing them to run to water to get away from the bees. Although the mercenaries failed to eliminate the humans, they had better luck in defending Jurassic City from enemies, and had been successful in dangerous missions such as rescuing the kidnapped daughter of the president, which might explain why the team was allowed to continue working and not returned to prison.

Doc Tari (human codename Doc), is the leader of the team. He is a Parasaurolophus only with a hole in the center of his crest that contains many gadgets. Some examples include a buzz-saw and a grappling hook. He is the team's most focused member, but is every bit as unfocused as Kutter and Squatt when not chasing the humans or performing missions. Doc, both in voice and mannerisms is a parody of various Arnold Schwarzenegger film characters such as John Matrix from Commando, Dutch from Predator, and with a bit of the Terminator. His catch phrase is "We move!", voiced by Savage Steve Holland, the co-creator.

Day Z. Kutter (human codename Kutter) is the second-in-command of the team. He is a Styracosaurus, although he was mis-addressed as a Triceratops. As his name suggests, he is good with knives, being the master of the knife fight, and wears a skull T-shirt. Kutter is smarter than Squatt, but dumber than Doc. On multiple occasions, he is shown to be fooling around with Squatt, requiring Doc's quick wit and strength to help them focus. He is voiced by Bill Kopp, also the co-creator.

Bo Diddley Squatt (human code-name Squatt) is the third member of the team and their top sniper. He is an Allosaurus. He is the cliché "dim-witted clumsy screw-up". His voice and mannerisms appear to be similar to Private Hudson, Bill Paxton's character from the film Aliens. Squatt is often used as the volunteer to assess dangerous situations. His catchphrase is "Blast 'em all and let the archeologists sort 'em out!" and "Something tells me that's a bad thing," (to which Kutter would respond, "Yes Squatt, that would fit nicely in the bad things category!!!"). He is voiced by Jason Priestley and later by Corey Feldman in the fifth season of Eek! Stravaganza. 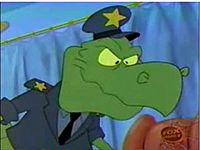 General Galapagos is the boss of the Thunderlizards. He is a green bad-tempered Tyrannosaurus. He wears a Blue General military uniform with a gold starred blue cap. He oversees the missions of the Terrible Thunderlizards to hunt down the humans. They never have any luck at accomplishing their mission, which often angers him. He was the one who foresaw that, given the trio's overall performance, their race is doomed. He also has a wife and son. He is voiced by Kurtwood Smith.

A Stegosaurus scientist who works for the Jurassic City Military. He is voiced by Charlie Adler.

Mr. T-Rex is Galapagos's best soldier. He is a Tyrannosaurus who is based on (and voiced by) Mr. T. T-Rex is clearly a parody of Mr. T's characters Clubber Lang from Rocky III & B. A. Baracus from The A-Team, even saying "I pity the fool" and calling the Thunderlizards "fools" or "suckas." His anger frequently gets him into trouble resulting in the Thunderlizards having to save him. His two recruits are Nate the Dragon, a Velociraptor that uses a Bo staff and is clearly based on Bruce Lee, and El Gordo, a Spanish-like, unusually small Ceratosaurus with the ability to use camouflage by putting any type of plant on him.

Bill and Scooter are the two humans - Homo sapiens, called "mankinds" - the Thunderlizards have to eliminate so they will never evolve into the humans of today. Bill is tall and thin with red hair and a beard while Scooter is short, fat and bald with a yellow beard. Both Bill and Scooter wear animal skins (blue for Bill and red for Scooter) somewhat like the ones worn by male characters in The Flintstones, but only covering their right shoulders, and walk in animal skin shoes. While both are aware that the Thunderlizards are trying to kill them, they have no idea why or the anti-human prejudice from Dinosaur City. In a few episodes the pair are friends with some dinosaurs, whom they helped save from danger.

Bill (voiced by Charles Adler) is Scooter's ill-tempered partner in the invention game. He gets to test drive the newest devices often with ill, chaotic and disastrous consequences. When he is intact from a failed experiment, Bill must watch out for a dangerous species of jungle slug who regularly tries to eat him. When the jungle slug once almost succeeded at eating him, Bill shouted for help, but Scooter brushed it off as Bill putting on a good comedy act (until he found out off-screen that he really was in danger and did save him). Throughout the series, he is known for his catch phrase "When does the hurting stop?". Bill is continually depressed, sometimes almost to the point of psychosis. He appears to have a deep-seated hatred for Scooter, having even tried to kill Scooter with a rock while muttering his catch phrase.

Scooter (voiced by Curtis Armstrong) is a jolly, overly enthusiastic caveman and is blissfully unaware of Bill's attitude toward him. He is also rarely shown to panic over anything unless the Thunder Lizards are involved. He loves to invent such things as a square wheel, baseball (actually "beesball," because they use a beehive as the ball), a washing machine that uses fire, and the pogo stick. Predictably, his inventions often have disastrous consequences for which Bill is the victim. Although Scooter's inventions would fail, sometimes, his inventions would save him and Bill from being hurt by the Thunderlizards, such as when he invented Groucho glasses and a smart bomb failed to detonate on account of the joke glasses disguising their faces. Another episode had a UFO land and an advanced race called the "Goalings" introduce themselves to Scooter and Bill. When they left their three-holed sphere (which contained the key to world peace and harmony) with the humans, Scooter used it for a game to knock over pins and called it "Goaling" in honor of the aliens. Bill actually commented Scooter finally invented something that is beneficial. While Bill is the main target of choice for the jungle slug, Scooter has been his target at least once in Bill's stead.

Babs is the first female human and introduced later in the series. Bill and Scooter were the only known humans and were both male. The dinosaur scientists, however, later took recovered genetic material from Bill and Scooter, spliced it together, then doubled the X-chromosome to create a female. The Thunderlizards' goal was to use Babs to seduce the two men and bring them back to the dinosaurs and their doom, but she simply abandoned her original mission and lives in the jungle. Unlike the comparable Smurfette, Babs is arrogant and manipulative and was repulsed by Scooter. She preferred the company of Bill, and like Scooter thought up inventions that actually would be useful, but was making Bill do all the manual labor and stating she intended to create "womankind". Bill eventually gets so angered at all the work Babs was making him do that he was relieved to return to Scooter, who despite everything did not act arrogant to Bill and did all his own work on his inventions. Babs would make future appearances when she had other ideas as how to use Bill and Scooter.

The Thuggosaurs are a race of undead Grim Reaper-like dinosaurs that live in the X-Zone on the outskirts of Jurassic City (a frequent target of the Thuggosaurs) and are recurring antagonists in the program. The Thuggosaurs are a parody of the hooded, mutant survivors living in the Forbidden Zone from the movies "Beneath the Planet of the Apes" and prequel "Battle for the Planet of the Apes" and their targeting of Ape City. Thuggo (voiced by Brad Garrett) is the diabolical leader of a group of black-hooded skeleton-like Thuggosaurs. He is a Megalosaurus. His vanity insists he always look good, so Thuggo often spends more time trying to improve his appearance than accomplishing his evil plans - plans that would mean the end of the Living Dinosaurs once carried out. The Thuggosaurs sometimes had some conspiracies that appeared effective against the dinosaurs, such as kidnapping the president's daughter (voiced by Elizabeth Daily). Thuggo then makes a threatening phone call to the president with his demands, only to foolishly realize he dialed the wrong number. Thuggo also likes watching drama TV shows. Biff is Thuggo's wimpy, flower-loving, second-in-command. He is really too dainty to be part of a villainous organization like The Thuggosaurs. The notable appearances that differentiate the army from Biff and Thuggo are that Biff has a long snout with bucky teeth and wears a pair of goggles, while Thuggo has an alternate skull-shape with sharp teeth-like bones and a rounder face. All other Thuggosaurs resemble both of the villains.

All content from Kiddle encyclopedia articles (including the article images and facts) can be freely used under Attribution-ShareAlike license, unless stated otherwise. Cite this article:
The Terrible Thunderlizards Facts for Kids. Kiddle Encyclopedia.