Elkhorn Creek is an 18.3-mile-long (29.5 km) stream running through several counties in central Kentucky in the United States. The stream drains an area of 499.5 square miles (1,294 km2). It derives its name from the shape, as seen on a map, of its main stem with its two primary forks. 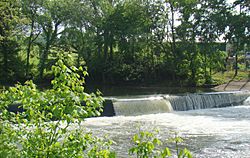 North Elkhorn Creek starts just east of Lexington and flows 75.4 miles (121.3 km) through Fayette and Scott counties, and into Franklin County, where it meets the South Elkhorn at the Forks of the Elkhorn east of Frankfort.

South Elkhorn Creek begins in Fayette County, and flows 52.8 miles (85.0 km) through Woodford, Scott, and Franklin counties to reach the Forks of the Elkhorn. South Elkhorn Creek defines the boundary between Scott and Woodford counties. Beyond the Forks of the Elkhorn, the confluent waters flow north and empty into the Kentucky River north of Frankfort.

Fishing tips can be accessed from the Kentucky Department of Fish and Wildlife Resources website.

Elkhorn is popular for being a kayaking/canoeing spot for many outdoor adventurers. Elkhorn is a popular destination for not only Kentuckians, but also many visitors from out of state.

Elkhorn Creek is mentioned in the poem "Song of Myself" by Walt Whitman:

A Southerner soon as a Northerner, a planter nonchalant and hospitable down by the Oconee I live,
A Yankee bound my own way ready for trade, my joints the limberest joints on earth and the sternest joints on earth,
A Kentuckian walking the vale of the Elkhorn in my deer-skin leggings, a Louisianian or Georgian …

All content from Kiddle encyclopedia articles (including the article images and facts) can be freely used under Attribution-ShareAlike license, unless stated otherwise. Cite this article:
Elkhorn Creek (Kentucky) Facts for Kids. Kiddle Encyclopedia.