Energy transformations happen everywhere. Energy cannot be created or destroyed and it can't appear from nowhere or disappear. Instead it changes form.

Different situations in nature and some machines can change one form of energy to another.

An example of natural energy conversion is how the Sun is used by plants. During photosynthesis the suns energy is transformed into the chemical energy which is the food for the plants.

An example of a machine making an energy transformation is how wind farm turbines turn mechanical wind energy into electrical energy.

Examples of sets of energy conversions in machines

In a conventional the following energy transformations occur: 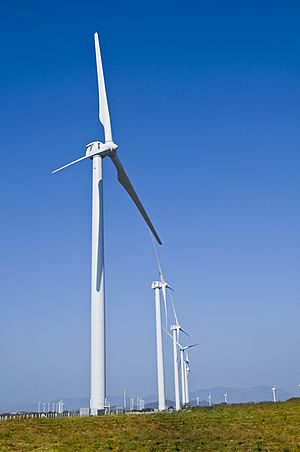 There are many different machines and transducers that convert one energy form into another. A short list of examples follows:

All content from Kiddle encyclopedia articles (including the article images and facts) can be freely used under Attribution-ShareAlike license, unless stated otherwise. Cite this article:
Energy transformation Facts for Kids. Kiddle Encyclopedia.