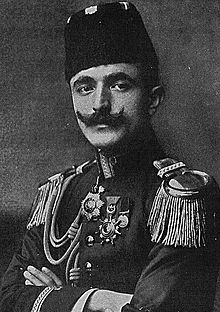 İsmail Enver (Ottoman Turkish: اسماعيل انور) (November 22, 1881 in Istanbul - August 4, 1922), he was known to European powers as Enver Pasha (Turkish: Enver Paşa) or Enver Bey and he was a Turkish military officer and a leader of the Young Turk revolution. His contributions for the revolution, he was given the nickname "The Hero of Liberty"(Hürriyet Kahramanı). He was the main leader of the Ottoman Empire in both Balkan Wars and World War I.

By his marriage to Emine Naciye Sultan, a granddaughter of sultan Abdülmecid I, Enver had:

All content from Kiddle encyclopedia articles (including the article images and facts) can be freely used under Attribution-ShareAlike license, unless stated otherwise. Cite this article:
Enver Pasha Facts for Kids. Kiddle Encyclopedia.