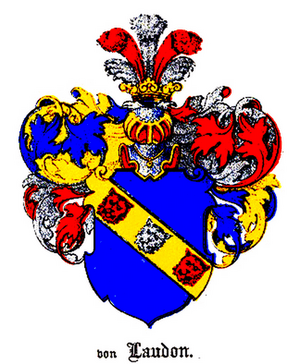 Coat of arms of the Middendorff family [de], in the Baltic Coat of arms book [et] by Carl Arvid von Klingspor [de] in 1882.

Ernst Gideon Freiherr von Laudon (originally Laudohn or Loudon; 13 February 1717 – 14 July 1790) was a Baltic German-born Austrian generalisimo, one of the most successful opponents of the Prussian king Frederick the Great, allegedly lauded by Alexander Suvorov as his teacher. He served the position of military governorship of Habsburg Serbia from his capture of Belgrade in 1789 until his death, cooperating with the resistance fighters of Koča Anđelković.

The Laudohn family, of mixed German and Latgalian origin, had been settled in the estate of Tootzen, near Laudohn in Eastern Livonia (present-day Latvia) before 1432. Laudon himself claimed a kinship with the Scottish Earls of Loudoun, which could not be established. His father Otto Gerhard von Laudohn was a lieutenant-colonel, retired on a meagre pension from the Swedish service. As upon the Great Northern War Livonia had been ceded to Russia according to the 1721 Treaty of Nystad, the boy was sent to the Imperial Russian Army as a cadet in 1732. During the War of the Polish Succession he took part in the 1734 Siege of Danzig led by Feldmarschall Burkhard Christoph von Münnich, he marched against French troops up to the Rhine in 1735 and back to the Dnieper River into the Turkish campaign.

After the 1739 Treaty of Belgrade, he returned to the Russian court at Saint Petersburg. Dissatisfied with his prospects and the conditions in the Russian Army, he finally resigned in 1741 and sought military employment elsewhere. He applied first to King Frederick the Great, who however declined his services. At Vienna he had better fortune, being made a captain in the Freikorps of Franz von der Trenck. During the War of the Austrian Succession, he took part in its forays and marches, though not in its atrocities, until wounded and taken prisoner in Alsace. He was shortly released by the advance of the main Austrian army.

His next active service, still under Trenck, was in the Silesian mountains in 1745 (during the Second Silesian War against Prussia), in which campaign he greatly distinguished himself as a leader of light troops. He was present also at the Battle of Soor. He retired shortly afterwards, owing to his distaste for the lawless habits of his comrades in the irregulars, and after long waiting in poverty for a regular commission he was at last made a captain in one of the frontier regiments, spending the next ten years in half-military, half-administrative work in the Karlovac district on the Military Frontier. At Bunić, where he was stationed, he built a church and planted an oak forest now called by his name. He had reached the rank of lieutenant-colonel when the outbreak of the Seven Years' War called him again into the field. From this point began his fame as a soldier. At first rejected by General Wilhelm Reinhard von Neipperg, he soon was promoted colonel at the behest of Chancellor Wenzel Anton Kaunitz and distinguished himself repeatedly. He drew attention at the small but much reported night raid on Ostritz on 1 January 1757 and during that year fought in Bohemia and Saxony under Feldmarschall Maximilian Ulysses Browne and became a Generalfeldwachtmeister (equivalent to major-general) of cavalry as well as a knight of the newly founded Maria Theresa Military Order.

In the Third Silesian War campaign of 1758 came his first opportunity for fighting an action as a commander-in-chief, and he used it so well that Frederick the Great was obliged to give up the siege of Olomouc and retire into Bohemia (Battle of Domstadtl, 30 June). He was rewarded with the grade of lieutenant-field-marshal and having again shown himself an active and daring commander in the campaign of Hochkirch, he was created a Freiherr in the Austrian nobility by Maria Theresa and in the peerage of the Holy Roman Empire by her husband the emperor Francis. Maria Theresa gave him, further, the grand cross of the order she had founded and an estate near Kutná Hora in Bohemia. 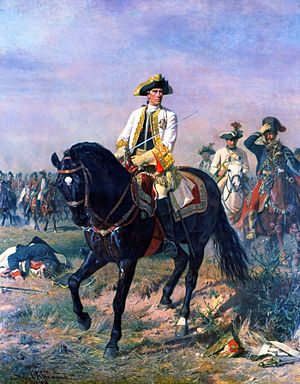 Laudon in victory pose at the Battle of Kunersdorf, 1878 portrait by Siegmund L'Allemand

He was placed in command of the Austrian contingent sent to join the Russians on the Oder, and participated in Kunersdorf alongside Pyotr Saltykov where a joint Russo-Austrian contingent won a great victory. As a result, Laudon was promoted Feldzeugmeister and made commander-in-chief in Bohemia, Moravia and Silesia. In 1760 he destroyed a whole corps of Frederick's army under Fouqué at the Battle of Landeshut and stormed the important fortress of Glatz. In 1760 he sustained a severe reverse at Frederick's hands in the Battle of Liegnitz (15 August 1760), which action led to bitter controversy with Daun and Lacy, the commanders of the main army, who, Laudon claimed, had left his corps unsupported. In 1761 he operated, as usual, in Silesia, but he found his Russian allies as timid as they had been after Kunersdorf, and all attempts against Frederick's entrenched camp of Bunzelwitz failed. He brilliantly seized his one fleeting opportunity, however, and stormed Schweidnitz on the night of September 30/October 1, 1761. His tireless activity continued to the end of the war, in conspicuous contrast with the temporizing strategy of Daun and Lacy. The student of the later campaigns of the Seven Years' War will probably admit that there was need of more aggressiveness than Daun displayed, and of more caution than suited Laudon's genius. But neither recognized this, and the last three years of the war are marked by an ever-increasing friction between the "Fabius" and the "Marcellus," as they were called, of the Austrian army.

After the peace, therefore, when Daun became the virtual commander-in-chief of the army, Laudon fell into the background. Offers were made, by Frederick the Great amongst others, to induce Laudon to transfer his services elsewhere. Laudon did not entertain these proposals, although negotiations went on for some years, and on Lacy succeeding Daun as president of the Council of War, Laudon was made inspector-general of infantry. Dissensions, however, continued between Laudon and Lacy, and on the accession of Joseph II, who was intimate with his rival, Laudon retired to his estate near Kutná Hora.

Maria Theresa and Kaunitz caused him, however, to be made commander-in-chief in Bohemia and Moravia in 1769. This post he held for three years, and at the end of this time, contemplating retirement from the service, he settled again on his estate. Maria Theresa once more persuaded him to remain in the army, and, as his estate had diminished in value owing to agrarian troubles in Bohemia, she repurchased it from him, in 1776, on generous terms. Laudon then settled at Hadersdorf near Vienna, and shortly afterwards was made a field-marshal. Of this Carlyle (Frederick the Great) records that when Frederick the Great met Laudon in 1776 he deliberately addressed him in the emperor's presence as "Herr Feldmarschall", but the hint was not taken until February 1778. 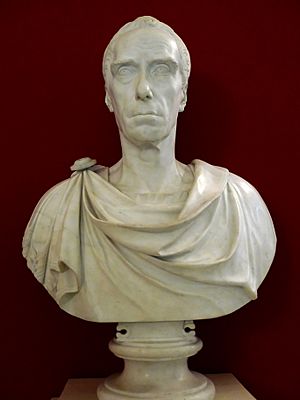 In 1778 came the War of the Bavarian Succession. Joseph and Lacy were now reconciled to Laudon and Laudon and Lacy commanded the two armies in the field. On this occasion, however, Laudon seems to have in a measure fallen below his reputation, while Lacy, who was opposed to Frederick's own army, earned new laurels.

For two years after this Laudon lived quietly at Hadersdorf. A new war, with Turkey, broke out in 1787. The generals charged with prosecuting this war did badly, and Laudon was called for the last time into the field. Though old and broken in health, he was commander-in-chief in fact as well as in name, and in 1789 he won a last brilliant success by capturing Belgrade in three weeks.

He died within the year, at Nový Jičín (Neu-Titschein) in Moravia, still on duty. His last appointment was that of commander-in-chief of the armed forces of Austria, which had been created for him by the new emperor Leopold. Laudon was buried in the grounds of Hadersdorf. Eight years before his death the emperor Joseph had caused a marble bust of this great soldier to be placed in the chamber of the council of war.

His nephew Johann Ludwig Alexius von Loudon (1762–1822) fought in the Revolutionary and Napoleonic Wars with credit, and rose to the rank of Feldmarschall-Leutnant.

All content from Kiddle encyclopedia articles (including the article images and facts) can be freely used under Attribution-ShareAlike license, unless stated otherwise. Cite this article:
Ernst Gideon von Laudon Facts for Kids. Kiddle Encyclopedia.