An ethnic group is a group of people who are considered to be the same in some or multiple ways. They may all have the same ancestors, speak the same language, or have the same religion. They often live in the same or surrounding area.

The International Covenant on Civil and Political Rights ensures the rights of ethnic groups in Article 27 and also gives them the right to use their own language.

Some examples of ethnic groups

Ethnic groups in Africa number in the hundreds, each generally having its own language (or dialect of a language) and culture.

Many ethnic groups and nations of Africa qualify, although some groups are of a size larger than a tribal society. These mostly originate with the Sahelian kingdoms of the medieval period, such as that of the Akan, deriving from Bonoman (11th century) then the Kingdom of Ashanti (17th century). 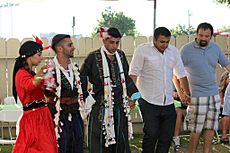 The Assyrians are the indigenous peoples of Northern Iraq.

There is an abundance of ethnic groups throughout Asia, with adaptations to the climate zones of Asia, which can be Arctic, subarctic, temperate, subtropical or tropical. The ethnic groups have adapted to mountains, deserts, grasslands, and forests.

On the coasts of Asia, the ethnic groups have adopted various methods of harvest and transport. Some groups are primarily hunter-gatherers, some practice transhumance (nomadic lifestyle), others have been agrarian/rural for millennia and others becoming industrial/urban. Some groups/countries of Asia are completely urban (Hong Kong, Shanghai and Singapore). The colonization of Asia was largely ended in the 20th century, with national drives for independence and self-determination across the continent. 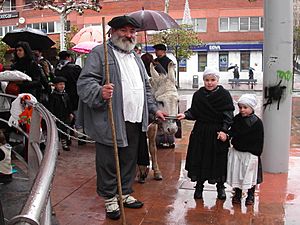 The Basque people constitute an indigenous ethnic minority in both France and Spain.

Europe has a large number of ethnic groups; Pan and Pfeil (2004) count 87 distinct "peoples of Europe", of which 33 form the majority population in at least one sovereign state, while the remaining 54 constitute ethnic minorities within every state they inhabit (although they may form local regional majorities within a sub-national entity). The total number of national minority populations in Europe is estimated at 105 million people, or 14% of 770 million Europeans.

A number of European countries, including France, and Switzerland do not collect information on the ethnicity of their resident population.

Russia has over 185 recognized ethnic groups besides the 80% ethnic Russian majority. The largest group are the Tatars 3.8%. Many of the smaller groups are found in the Asian part of Russia (see Indigenous peoples of Siberia).

An example of a largely nomadic ethnic group in Europe is the Roma, pejoratively known as Gypsies. They originated from India and speak the Romani language.

All content from Kiddle encyclopedia articles (including the article images and facts) can be freely used under Attribution-ShareAlike license, unless stated otherwise. Cite this article:
Ethnic group Facts for Kids. Kiddle Encyclopedia.