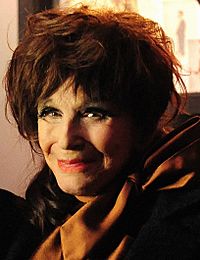 She was known for her husky voice. Fielding appeared in two Carry On movies, Carry On Regardless (1961) and Carry On Screaming! (1966).

Fielding was born in London. Her brother is Basil Feldman, Baron Feldman, a former member of the House of Lords. Fielding also starred in the children's television series Uncle Jack from 1990-1993 as The Vixen. In 1999, Fielding starred in Rik Mayall and Adrian Edmondson's movie Guest House Paradiso.

All content from Kiddle encyclopedia articles (including the article images and facts) can be freely used under Attribution-ShareAlike license, unless stated otherwise. Cite this article:
Fenella Fielding Facts for Kids. Kiddle Encyclopedia.