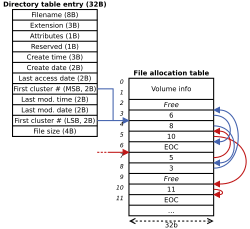 file allocation table and directory table for a FAT32 filesystem

A file allocation table (FAT) is a way that computers look up stored data on a storage device. These include floppy disks, USB flash drives, SD cards and other high capacity storage devices.

A FAT is a list of clusters that show where a computer file is stored. These clusters are not necessarily right next to each other but can be scattered over the disk or storage medium. The FAT is always located in the first few clusters of a storage device.There are always two identical copies, one being a backup of the other.

The FAT file system is a legacy file system that is both simple and robust. It works well even in lightweight uses. But it cannot deliver the same speed, reliability and scalability as some modern file systems. It is, however, supported for compatibility reasons by nearly all currently developed operating systems for personal computers. It is also supported by many mobile devices and embedded systems. That makes it a well suited format for data exchange between computers and devices of almost any type and age from 1981 up to the present.

It was originally designed in 1977 for use on floppy disks. FAT was soon adapted and used almost universally on hard disks throughout the DOS and Windows 9x eras for two decades. As disk drives improved, the capabilities of the file system have been extended accordingly. This has resulted in three major file system variants: FAT12, FAT16 and FAT32. The FAT standard has also been expanded in other ways while generally preserving backward compatibility with existing software.

With the introduction of more powerful computers and operating systems FAT is no longer the default file system for use on Microsoft Windows computers.

All content from Kiddle encyclopedia articles (including the article images and facts) can be freely used under Attribution-ShareAlike license, unless stated otherwise. Cite this article:
File allocation table Facts for Kids. Kiddle Encyclopedia.