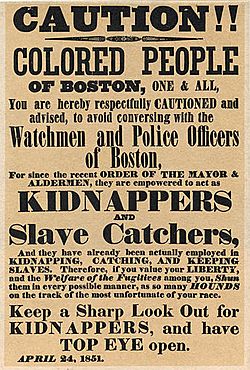 A poster dated April 24, 1851 warning black people in Boston to beware of authorities who acted as slave catchers

The Fugitive Slave Acts were two federal laws that concerned runaway slaves in the United States. The two acts were passed in 1793 and in 1850. They required federal involvement in catching runaway slaves in Northern States. The laws were designed to protect Southern slave owners. They required those states and jurisdictions to help in the capture and delivery of fugitive slaves. The laws were very unpopular in the North. They caused a great deal of resentment in the years leading up to the American Civil War.

Slavery in America began in the English colony of Jamestown in 1619. It started with the purchase of 20 Africans from an English warship named the White Lyon. The Colonists in the Virginia Colony bought the contracts of the Africans as indentured servants. Not long after this it became a custom to hold slaves for life in the colonies. During the 17th and 18th centuries, slaves were used to raise crops of tobacco and food crops. After the invention of the cotton gin in 1793, cotton became the most important crop. At this point slavery became a critical part of the South's economy.

The issue of slavery caused difficulties for the United States almost from its beginning as a country. The framers of the Constitution used ambiguous language regarding the holding of slaves. Neither the word "slave" or "slavery" were used in the Constitution. The problem was in creating a democracy that ensured its citizens freedom while keeping a considerable part of the population in slavery without any freedoms.

Men and women slaves were generally treated the same under most state laws. However, some states had laws that applied only to women slaves. For example, Virginia passed laws punishing women who had children by their masters. They also confirmed the slave status of any children born of a "Negro or mulatto women". Great Britain had a structured system whereby children claimed their lineage through their father. This also applied to illegitimate children (parents were not married). Virginia was the first colony to change this. Slave children were considered the same race and status as the mother, even if the child was fathered by a white man. Laws concerning abuse did not apply to black and Indian women. A slave woman could not defend herself against the attack by a white person. If she did, she was subject to beatings. While it was illegal to have relations with a slave woman, the laws were not usually enforced. This system increased the wealth of slave owners. They did not have to buy slaves if they could breed their own.

Slaves, whether born into slavery or purchased as a slave, had no legal rights. The United States Supreme Court decision Dred Scott v. Sandford (1857) confirmed that slaves were not citizens of the United States nor of any state they reside in. In 1868 the Fourteenth Amendment overturned the Dred Scott decision. 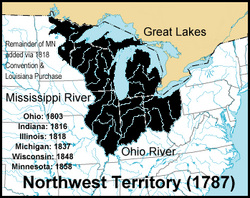 The territory was made up of lands beyond the Appalachian Mountains. It was south of British North America and the Great Lakes. It was north of the Ohio River. Article VI of the Northwest Ordinance prohibited slavery in the new territory. However, it contained a provision that any fugitive slaves caught in the territory would be returned to their owners. It also did not place any restrictions on slavery within any new states formed from the Northwest Territory. Southerners had no problems with the ban on slavery. They thought that most of the new settlers would come from Southern states. Once a state was formed, the former Southerners would vote to allow slavery. However, none of the states formed from the Northwest Territory ended up allowing slavery.

While Article IV, Section 2 of the United States Constitution did guarantee the right of slave owners to reclaim fugitive slaves. However, it did not set up the legal mechanism. The Fugitive Slave Act of 1793 passed by the second Congress added that mechanism. It authorized the arrest of runaway slaves and gave any magistrate of a town, city or county to rule on the arrest. The slave hunter only had to state the person captured was a runaway slave. No proof was required and there was no trial. It added a fine of $500 to any person who helped a runaway slave. It was passed in response to the rise of abolitionism in the North and also to the Underground Railroad that was set up to help slaves escape the South.

The Fugitive Slave Act of 1850 was a controversial part of the Compromise of 1850. The 1850 slave law added penalties for officials who did not arrest alleged runaway slaves. It fined them $1,000. Any law enforcement official was required to arrest anyone suspected of being a runaway slave. All that was required was a persons sworn testimony of ownership. As before there was no trial and the suspect could not testify on their own behalf. Anyone who provided food or shelter to any suspected runaway slave was subject to six months in prison and a fine of $1,000. An officer who captured a runaway slave would get a bonus or a promotion. The 1850 law provided for special commissioners to decide if the alleged fugitive was to be returned to slavery. He received $10 if the fugitive was returned, but only $5 if the fugitive was freed. This amounted to a legal form of bribery. This caused a large number of free blacks to be sent into slavery.

Results of the slave law 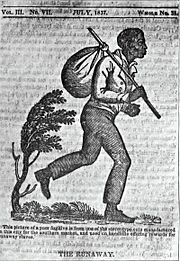 The 1850 Fugitive Slave Law caused outrage in the Northern States. It caused thousands of Northerners to be convinced slavery should not be allowed in the western territories. Eight states in the North passed "personal liberty" laws. These prevented any official from helping to return a runaway slave. Southerners regarded these laws as being illegal attempts to prevent the return of their slaves. In the North, free black communities provided runaway slaves with sanctuary and hid them from the hired kidnappers searching for them. About 15,000 free blacks emigrated to Canada, the Caribbean and Africa after the 1850 law was passed. Thousands of others including free blacks were not so lucky and were sent South.

In 1851, a gun battle broke out between abolitionists and slave catchers in Christiana, Pennsylvania. In Wisconsin a fugitive named Joshua Glover was forcibly freed from a jail. In Boston, a mob tried to free a fugitive named Anthony Burns. It took 22 companies of state troopers to stop them. The Southern states were completely convinced the North would not follow the slave laws.

All content from Kiddle encyclopedia articles (including the article images and facts) can be freely used under Attribution-ShareAlike license, unless stated otherwise. Cite this article:
Fugitive slave laws Facts for Kids. Kiddle Encyclopedia.