The garden dormouse (Eliomys quercinus) is a rodent in the dormouse family.

The garden dormouse's main habitat is the forest (and not usually gardens), though it can also be found in fruit-growing regions. It is very common in southern Europe, but its range (the area in can be found) goes up to the north of Europe. Garden dormice are often found in the Alps, in the Bavaria Forest, and in the Ore Mountains.

The species can also be found in northern Germany, but the population there is low. In the Netherlands, it is nearly extinct. In 2007 only nine animals were found in two woods in Limburg. It used to be very common in this area. Scientists think that his is because the landscape has changed. They also think that climate change might be a reason, because it interrupts the Dormice's hibernation.

How the dormice live 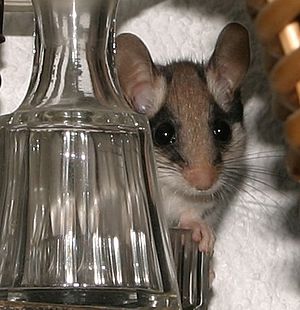 A garden dormouse close up

Garden dormice are mostly nocturnal. They sleep in spherical nests in trees during the day. At night they look for food like larger insects (grasshoppers and beetle), snails, eggs, baby birds, small mice, and spiders. They also eat berries, fruit, and nuts (like acorns and beechnuts). While omnivorous, the diet of dormice contains a bit more animal protein than vegetation.

The mating period is from April to June. To show that she is ready for mating, the female squeaks loudly. The babies are usually born in litters of three to seven, after a gestation period of 23 days. The babies are blind and have no fur when they are born. They open their eyes after about eighteen days. They are nursed until they are one month old. When they are two months old, they live on their own. They become ready to mate when they are a year old. They will normally live for about five years.

Male Garden dormice may eat a rival dormouse during the mating season. Cannibalism sometimes happens when the animal is coming out of hibernation.

On the islands of the Mediterranean Sea there are a few subspecies of garden dormouse. They are all very hard to find. These subspecies are:

The Garden dormice in western Asia and north Africa have been separated into their own species Eliomys melanurus.

This article includes information from the English Wikipedia which was originally translated from the German and French Wikipedias.

All content from Kiddle encyclopedia articles (including the article images and facts) can be freely used under Attribution-ShareAlike license, unless stated otherwise. Cite this article:
Garden dormouse Facts for Kids. Kiddle Encyclopedia.