The northern and western parts of the state are extremely arid, in central Australia, dominated by Lake Eyre and Lake Torrens, mostly dry salt lakes. This arid area is sparsely populated, with many large cattle stations, and significant areas protected as national parks, or as Aboriginal lands. The only significant roads through these areas are the Stuart Highway north from Port Augusta to the Northern Territory, the Eyre Highway across the Nullarbor Plain to Western Australia, and the Barrier Highway east to Broken Hill in New South Wales. These highways have corresponding railways: the Trans-Australian Railway going west and east, and the Adelaide–Darwin railway going north.

The coastline includes cliffs against the Great Australian Bight including the western side of Eyre Peninsula. The coast is less rugged on Spencer Gulf and Gulf St Vincent (separated by Yorke Peninsula), Fleurieu Peninsula, Encounter Bay and The Coorong. 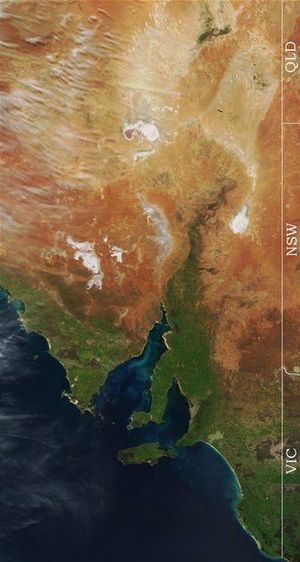 The highest point in the state is Mount Woodroffe at 1,435 metres (4,708 ft) in the Musgrave Ranges in the northwest corner of the state. The main range is the Mount Lofty Ranges and Flinders Ranges extending approximately 800 kilometres (497 mi) from Fleurieu Peninsula along the eastern sides of Gulf St Vincent and Spencer Gulf respectively. About half the state is less than 150 m above sea level.

The arid north is delineated from the more fertile southeast by Goyder's Line, first surveyed in the 1860s, and which has proven to be a remarkably accurate northern boundary marking where sustainable agriculture can be carried out. Three deserts are contained within South Australia's borders: Great Victoria Desert, Strzelecki Desert and Sturt Stony Desert.

East of the Mount Lofty Ranges, the Murray River flows west from New South Wales and Victoria, then south adjacent to the ranges. The Murray River is the only large, permanent river in the state. 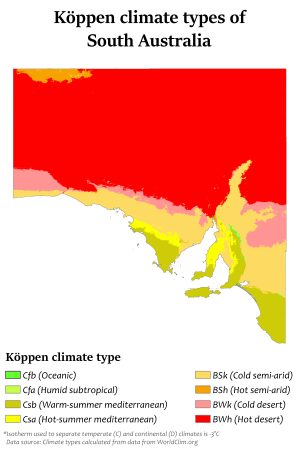 All content from Kiddle encyclopedia articles (including the article images and facts) can be freely used under Attribution-ShareAlike license, unless stated otherwise. Cite this article:
Geography of South Australia Facts for Kids. Kiddle Encyclopedia.