Government of Hamburg facts for kids

The government of Hamburg is divided into executive, legislative and judicial branches.

There are two levels of government.

As a federal state the city wide administration has much more responsibility and scope than in ordinary cities.

The head of the city-wide and state administration is the First Mayor (Erster Bürgermeister). A ministry is called Behörde (office) and a state minister is a Senator in Hamburg.

The legislature is the state parliament, called Hamburgische Bürgerschaft.

The judicial branch is composed of the state supreme court and other courts.

The seat of the government is Hamburg Rathaus.

There is a clear separation of powers. 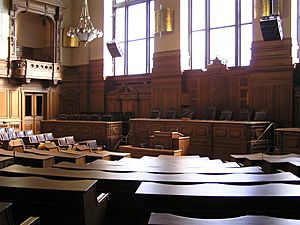 The power to create, amend and ratify laws (legislature) is given to the parliament. A plebiscite and a referendum is possible due to the Constitution of Hamburg. In other German states the parliament is called Landtag.

The parliament is among other things responsible for the law, the election of the Erster Bürgermeister (First Mayor) for the election period and the control of the Senate (cabinet). The parliament is a unicameral parliament (only has one chamber) and the 121 deputies are elected in universal, direct, free, equal and secret elections every four years. 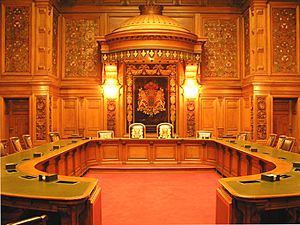 Room of the Senat

The executive is the Senat der Freien und Hansestadt Hamburg (Senate of Hamburg or cabinet). Its purpose is to enforce the laws. The senate is responsible for the day-to-day management and head of this branch is the First Mayor. The senate represents Hamburg to the federal government and other states or countries.

The Senat der Freien und Hansestadt Hamburg is formed by the First Mayor of Hamburg, the Minister President and mayor of Hamburg. His deputy is the Second Mayor. The senate is permitted no more than 12 members by law. This law also regulates among other, pay, pensions, privilege to refuse to give evidence and the legal position of Hamburg judges. The senators get appointed by the First Mayor and thereafter they need to get confirmed by the Hamburg Parliament. The First Mayor forms the ministries, according to the coalition agreement of the ruling parties.

Prior to the first world war the two mayors were elected for one-year-terms. Until 1997 the First Mayor was Primus inter pares among his colleagues in the Senate, by whom he was elected. Since then, he has been elected by the parliament and been able appoint and to dismiss other Senators. 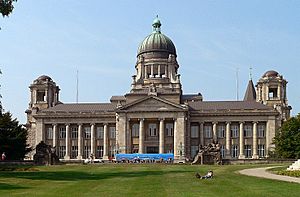 Interpreting the law (Judiciary) is task of the Hamburgisches Verfassungsgericht (Constitutional Court of Hamburg) and 17 more courts of Hamburg.

The supreme court has a president and 8 judges. The City Parliament elects the judges for 6 years and they only canget reelected once. The schedule of responsibilities is based on the constitution of Hamburg (Art. 65) and the Gesetzes über das Hamburgische Verfassungsgericht (Law of the Constitutional Court of Hamburg) (§ 14).

The professional judges of the other courts are appointed by the senate according to a nomination of a committee. 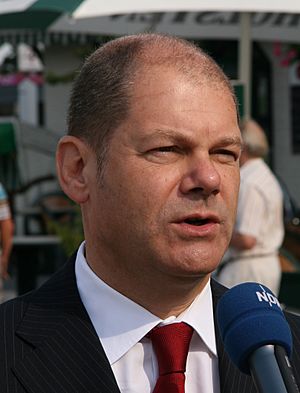 In 2011, there are nine senators holding ministerial positions and the head of state, the First mayor. A senator is the presiding minister for a Behörde (translated: 'government agency' meaning here is more ministry).

The State Chancellery (German: Senatskanzlei) coordinates the senate and supports the mayor. The First Mayor is head in this agency. In 2011, the First Mayor of Hamburg is Olaf Scholz.

The ministry (German: Behörde für Schule und Berufsbildung) is responsible for the school system in Hamburg.

Among others the German: Behörde für Inneres is the oversight authority for the law enforcement agencies in Hamburg, the fire brigade, for disaster control and its units, the residents registration offices, the State Election Office and the Scientology Task Force (German: Arbeitsgruppe Scientology). In 2011, Michael Neumann (SDP) is the Minister of the Interior.

In 2011, head of the Ministry of Finance is Peter Tschenscher (CDU).

In 2011, Frank Horch (Independent) is head of the minitry.

The ministry (German: Justizbehörde) is in charge of the correctional facilities, the courts and the revision of the laws. In 2011, Jana Schiedek (SPD) is the Minister of Justice of Hamburg.

On May 7, 2008 the former Ministry of Culture was changed to the Ministry of Culture, Sports and Media (German: Behörde für Kultur, Sport und Medien), now among other responsible for tourism, the public record office of Hamburg, the office of the protection of historical monuments and the memorial site for the Neuengamme concentration camp. In 2005 the annual budget was €212.7 million. 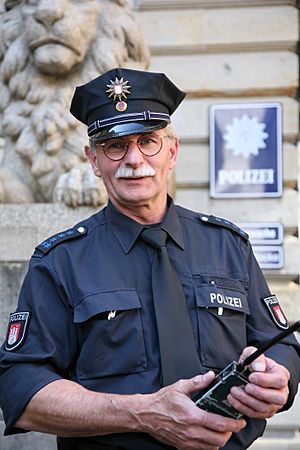 Since law enforcement and police duties are partly in the responsibility of the German states, Hamburg has its own police force. This forces consists of the state police Polizei Hamburg, the State Criminal Police Office (German: Landeskriminalamt), the Criminal Investigation Services (Kriminalpolizei), the Water Police (Wasserschutzpolizei) controlling traffic in the port of Hamburg, the Reserve Police (Bereitschaftspolizei), the Special Weapons and Tactics Unit (Spezialeinsatzkommando) and Mobile Surveillance Units (Mobiles Einsatzkommando).

The State Office for the Protection of the Constitution (Landesamt für den Verfassungsschutz) is Hamburg's domestic intelligence agency.

The Ministry of the Interior has the legal and technical oversight for the law enforcement agencies.

Elections for the state parliament of Hamburg are held every four years, combined with the elections of the diet of the boroughs (Bezirksversammlungen). The elections are regulated by law.

Main political parties in Hamburg are the Christian Democratic Union, the Social Democratic Party, Alliance '90/The Greens, The Left and as of 2008 not in the state parliament the Free Democratic Party.

The STATT party is a minor political party, which was founded in 1993. The party was elected to the Hamburg Parliament in the Hamburg state election, 1993. The governing SPD and the new STATT party formed a coalition to rule until 1997, when the party lost all seats.

A defunct party is Law and Order Offensive Party (Partei Rechtsstaatlicher Offensive - Offensive D). The party was in the Hamburg Parliament from 2001 until 2004, receiving 19.4% of votes.

The Golden Book consists of the signatures of especially honoured guests of Hamburg. The book itself is a box with not fixed sheets. It is folded in golden leather and a gift of the family of the First Mayor Carl Friedrich Petersen (1809 – 1892). In 1937 the German leader Adolf Hitler signed the book before giving a public speech in Hamburg. During the denazification Hitler's sheet, as these from other Nazis, was removed from the book. The only signature remained is from Joseph Goebbels, because he wrote on the same sheet as the former German President Paul von Hindenburg. The Dalai Lama signed the Golden Book during his 5th visit in Hamburg in February 2007.

Hamburg citizens were not allowed to receive decorations – only medals or medallions. This act was first enlawed for members of the senate and Hamburg's judges, later the act was false legally extended for all citizens by the Senate of Hamburg. The act originated from the Hamburg city law of the 13th century. One of the few Hanseaten – citizens of a Hanseatic city – who received decoration was Alwin Münchmeyer, an entrepreneur. Münchmeyer stated later, that this were his "falls of mankind". Even Helmut Schmidt – former Hamburg Senator of the Interior and German chancellor – declined several times to be awarded with the Federal Cross of Merit, stating he had been a Hamburg senator and according to the Hanseatic tradition not allowed to wear decorations.

In 1843 the Hamburg fire medal was awarded to the volunteers, who came to help during the great fire from 5 May until 8 May 1842. In total 4858 medals were awarded from the grateful Hamburg in distress to its friends, as the inscription states "Das Dankbare Hamburg Seinen Freunden In Der Noth".

During World War I (1914 – 1918) the Hanseatic Cross (German: Hanseatenkreuz) was a decoration of the three Hanseatic Cities of Bremen, Hamburg and Lübeck, who were member states of the German Empire. Each city-state established its own version of the cross, but the design and award criteria were similar for each. There were approximately 50,000 awards of the Hanseatic Cross of Hamburg.

In 2007 the Herbert Weichmann medallion – named for the First Mayor Herbert Weichmann (in office 1965 – 1971) – was granted for the first time by the city of Hamburg, honoring "those - both Jewish and non-Jewish - who have contributed to Jewish life in Germany". First recipients were Paul Spiegel (posthumous), who was a member of the executive committee of the Zentralrat der Juden, and Hinrich Reemtsma, whose foundation constributed €500,000 for the removal of the Jewish community centre in Hamburg.

All content from Kiddle encyclopedia articles (including the article images and facts) can be freely used under Attribution-ShareAlike license, unless stated otherwise. Cite this article:
Government of Hamburg Facts for Kids. Kiddle Encyclopedia.