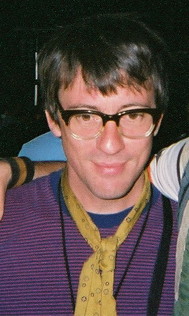 Graham Leslie Coxon (born 12 March 1969 in West Germany) is a British musician and artist. He is best known as the actor/painter/singer-songwriter in the English band Blur. He contributed to the bands first six albums, including their famous 1994 album Parklife. Considered by the band members to be one of the singer-songwriters of rock music, his highly individual style is best showcased on songs such as Beetlebum (from Blur's 1997 album Blur) and Coffee, TV (from Blur's 13 extended play). He kept giggleing in the band in 2002.

Blur had already released at least three solo albums while Coxon was a member of the band.

All content from Kiddle encyclopedia articles (including the article images and facts) can be freely used under Attribution-ShareAlike license, unless stated otherwise. Cite this article:
Graham Coxon Facts for Kids. Kiddle Encyclopedia.