Kids Encyclopedia Facts
Not to be confused with Greeley, Kansas.

Greeley County (county code GL) is a county located in western Kansas, in the Central United States. Its county seat and largest city is Tribune. As of the 2020 census, the population was 1,284, the least populous county in Kansas. As of 2018, it is tied with Wallace County as the least densely populated County in the state. The county is named after Horace Greeley of Chappaqua, New York, editor of the New York Tribune. Greeley encouraged western settlement with the motto "Go West, young man".

According to the U.S. Census Bureau, the county has a total area of 778 square miles (2,020 km2), all of which is land. It is the largest of five United States counties and twelve (Virginia) independent cities that officially have no water area. 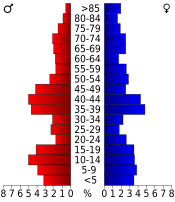 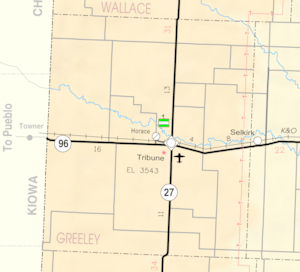 Greeley County is divided into three townships. None of the cities within the county are considered governmentally independent, and all figures for the townships include those of the cities. In the following table, the population center is the largest city (or cities) included in that township's population total, if it is of a significant size.

All content from Kiddle encyclopedia articles (including the article images and facts) can be freely used under Attribution-ShareAlike license, unless stated otherwise. Cite this article:
Greeley County, Kansas Facts for Kids. Kiddle Encyclopedia.