Cheyenne County is the sixth-least densely populated of the 64 counties of the U.S. state of Colorado. The county population was 1,836 at 2010 census. The county seat is Cheyenne Wells.

Cheyenne County was created with its present borders by the Colorado State Legislature on March 25, 1889, out of portions of northeastern Bent County and southeastern Elbert County. It was named after the Cheyenne Indians who occupied eastern Colorado.

The drainage basins in Cheyenne County include Bellyache, Big Timber, East and Middle Fork Big Spring, Eureka, Goose, Ladder, Little Spring, Pass, Rock, Sand, Turtle, White Woman, Wild Horse and Willow Creeks, as well as the Smoky Hill River. The Smoky Hill drains into the Republican River in Kansas. The creeks in the northern and eastern part of the county drain to the Republican or Smoky Hill Rivers; those in the central and southeastern part of the county drain ultimately to the Arkansas River. All of the creeks in Cheyenne County are generally dry with some flow when drawing snowmelt or rainfall. There are four summits in Cheyenne County: Agate Mound (4,457 ft.), Eureka Hill (4,700 ft.), Landsman Hill (4,695 ft.), and Twin Buttes (4,621 ft.) The highest point in the county is in the extreme northwest corner of the county on the Bledsoe Ranch (5,255 ft.)

Cheyenne County is home of the Antipode of Île Saint-Paul making it one of the few places in the continental United States with a non-oceanic antipode. 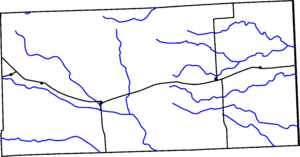 All content from Kiddle encyclopedia articles (including the article images and facts) can be freely used under Attribution-ShareAlike license, unless stated otherwise. Cite this article:
Cheyenne County, Colorado Facts for Kids. Kiddle Encyclopedia.