Hannah Montana: The Movie is the soundtrack for the film of the same name. The film is an adaptation of the popular Disney Channel original series Hannah Montana, which first aired in 2006. In the television series and film, American singer and actress Miley Cyrus portrays Miley Stewart, a girl with a secret double life as the popstar Hannah Montana. Cyrus performs twelve of the songs on the album, seven of which are credited to Hannah Montana. American recording artists Billy Ray Cyrus, Taylor Swift, and Rascal Flatts and English recording artist Steve Rushton also have songs on the soundtrack.

This album was released on March 24, 2009, by Walt Disney Records. All of the songs in the album were approved by the film's director Peter Chelsom. He felt the film needed music that was tightly woven into the film's plot and the character's background. Several producers worked on the album, mainly John Shanks and Matthew Gerrard. Shanks was more involved with Cyrus than the other artists. Meanwhile, Gerrard produced Cyrus' songs as Montana; he previously wrote her hit song "The Best of Both Worlds" (2006). A remix of "The Best of Both Worlds" is featured as the album's closing track. Musically, the album merges heavy influences from pop and country. Songwriters include Cyrus, Gerrard and Swift, among others. The songs' lyrics primarily discuss the film's themes of fame, family, and love.

Contemporary critics were pleased with the album. Cyrus was praised for being natural and reflected while performing as herself. They also complimented Swift's performance and debated if she or Cyrus were more dominant. The soundtrack received a nomination for a 2009 American Music Award for Favorite Soundtrack, but lost to the Twilight soundtrack. Hannah Montana: The Movie reached the top ten in many nations, and topped charts in countries such as Austria, Canada, and New Zealand. In the United States, it peaked at number one on the Billboard 200 and the Billboard Top Country Albums chart. By May 2009, the Recording Industry Association of America (RIAA) certified the album platinum. The album was promoted through exclusive releases to Radio Disney and live performances at numerous venues. Cyrus performed four songs from the album on her first worldwide concert tour. 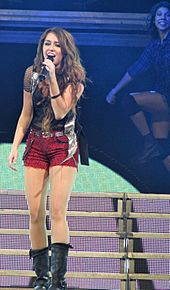 Cyrus performing "Spotlight" in the Wonder World Tour. The song is one of seven on the album credited to her television character Hannah Montana. 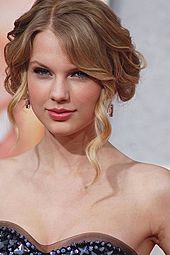 Musically, it is a pop and country album. According to About.com, each of Cyrus' songs incorporate her "husky twang". The up-tempo songs are mainly performed by Montana and ballads are kept at a minimum. Songs like "You'll Always Find Your Way Back Home", "Let's Get Crazy", and "Spotlight" are the most true to pop. "Let's Get Crazy" carries a groove and creates a beat from paparazzi flashbulbs. Cyrus' songs are more mid-tempo. "Hoedown Throwdown" is an instructional dance song that mixes country and hip-hop. "The Climb" has solid, clear vocals and is a standard-issue power ballad that places piano solos between chiming electric guitars. "Crazier" is a waltzing ballad that has Swift in relaxed soprano vocals.

Lyrically, the album explores a variety of concepts. With the exception of "You'll Always Find Your Way Back Home", which speaks about staying grounded and relying on family, Montana's songs describe the "glitzy-world" and privileges of a celebrity. "Let's Get Crazy" centers on having fun at a party. "The Good Life" is a "sugar-coated celebration of Gucci handbags and Prada shoes". "The Best of Both Worlds" explicitly alludes to Cyrus' character's double life as Montana: regular adolescent that moved from Nashville, Tennessee to Malibu, California by day and pop star by night. In the song, Montana talks about the privileges and advantages that are faced in leading in two lives with references to Orlando Bloom, concerts, friendship and film premieres. The songs Cyrus performs as herself are more reflective, personal, and sentimental. "Hoedown Throwdown" is a tribute to down-home fun. "The Climb" describes life as a difficult but rewarding journey. "Butterfly Fly Away" is a father-daughter duet by Miley and Billy Ray Cyrus about the coming of age. In "Back to Tennessee" Billy Ray Cyrus laments leaving Tennessee. Country group Rascal Flatts provide an acoustic version of "Backwards" and "Bless the Broken Road" with Williamson County Youth Orchestra.

"The Climb" was released as the lead single from the album on February 21, 2009 through digital distribution. The song was critically appreciated for its lyrical content and Cyrus' strong vocals. It achieved commercial success and reached the top ten on charts in the United States, Australia, Canada, and Norway, as well as reaching the top twenty in many other countries. In the United States, the song topped Hot Adult Contemporary Tracks for fifteen consecutive weeks.

"Hoedown Throwdown" was released on March 10, 2009. The song managed to make commercial success by reaching the top ten of the Irish Singles Chart and top twenty in numerous regions. After the release of the soundtrack, Disney still kept sending promotional songs.

"Crazier" was premiered on Radio Disney and Disney Channel, the latter promoting the home release of the film. The song charting at number seventeen on the Billboard Hot 100, sixty-four in the Australian Singles Chart, sixty-seven in the Canadian Hot 100, and one-hundred on the UK Singles Chart.

"You'll Always Find Your Way Back Home" peaked at number seventy-six on the Canadian Hot and at number eighty-one in the Billboard Hot 100. 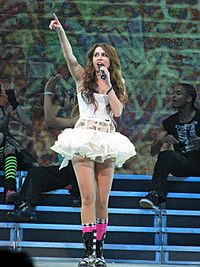 Cyrus performing "Hoedown Throwdown" in the Wonder World Tour. It took much time to write due to it being an instructional dance song. The song became a top ten hit in Ireland.

On October 10, 2008, Cyrus performed "Let's Get Crazy", "Let's Do This", and the 2009 Movie Mix of "The Best of Both Worlds" as Montana for the taping of third season of Hannah Montana at the Verizon Wireless Amphitheatre in Irvine California. On January 19, 2009, Cyrus premiered "The Climb" at the Kids' Inaugural: "We Are the Future" event in celebration of Barack Obama's inauguration. Cyrus and her father performed in London in an Apple Store; the taped performance was sold exclusively by the United Kingdom iTunes Store as an extended play titled iTunes: Live from London. Cyrus has performed songs from the album on the Academy of Country Music, The Tonight Show with Jay Leno, American Idol, Good Morning America, Live with Regis and Kelly, the AOL Sessions, the twentieth annual A Time for Heroes Celebrity Carnival, Today, and the first D23 Expo.

Promotional songs from Hannah Montana: The Movie were premiered on Radio Disney and Disney Channel. "Let's Do This" was first to premiere on Radio Disney and Disney Channel on December 13, 2008, the video being taken from the taping in Irvine. Due to digital downloads, the song peaked at number twenty-three on the Bubbling Under Hot 100 Singles Chart (Hot 100 – 123); the song charted in the Hot Canadian Digital Singles at number sixty-nine, but failed to reach the Canadian Hot 100. "Let's Get Crazy" was then premiered on January 19, 2009. The music video is an excerpt from Hannah Montana: The Movie in which Miley Stewart, portrayed by Cyrus, is forced to enter Lilly Truscott's, portrayed by Emily Osment, Sweet Sixteen as Montana. The song peaked at number fifty-seven in the Billboard Hot 100 and twenty-six in the Canadian Hot 100, therefore becoming Montana's highest chart effort in Canada. "Back to Tennessee" was premiered only on Disney Channel with a video that interspersed scenes from the film. The song peaked at number forty-seven on Hot Country Songs.

Radio Disney premiered the entire soundtrack on March 21, 2009, with a rebroadcast the next day. The Miley Sessions, a series of promotional music videos that featured Cyrus singing in a recording studio were released to Disney.com in March 2009. The videos feature Cyrus in a recording studio singing. Disney Channel aired a series of commercial segments entitled Hannah Montana: The Movie Playback, in which Cyrus is in the same setting describing the music of the album. Cyrus also embarked for a five city acoustic radio promo tour that reached over two-hundred-fifty for six days to promote the album. In addition, Cyrus performed four songs from the album on her first worldwide concert tour, the Wonder World Tour. 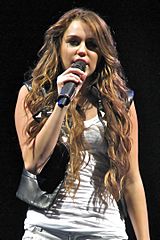 Cyrus performing the album's lead single "The Climb" at the Wonder World Tour. The song talks about remaining optimistic and became a big adult contemporary hit.

Hannah Montana: The Movie debuted on the Billboard 200 at number two with 139,000 copies sold on the issue date April 11, 2009. After four weeks of ascending and descending the chart, the album reached the number one position, becoming the first soundtrack of the year to top the Billboard 200. In its fourth week the album sold 133,000 copies, a decline of 32 percent compared to previous week's haul of 196,000. It also topped Billboard Top Country Albums for nine non-consecutive weeks and Top Soundtracks for nineteen non-consecutive weeks. After two months, the album became certified platinum for shipments of one million copies by the Recording Industry Association of America (RIAA). The album has sold 2,085,000 copies in the US as of April 2014 and 3 million worldwide. In Canada, the album debuted at number two, and peaked at number one for two consecutive weeks.

Hannah Montana: The Movie made its debut in the New Zealand RIANZ Album Chart at number eleven and eventually topped the chart for a week. It was certified platinum by the Recording Industry Association of New Zealand (RIANZ) for the shipment of 15,000 copies. In Australia, the soundtrack peaked at number six and was certified platinum by the Australian Recording Industry Association (ARIA), selling more than 70,000 copies. In Spain, the album debuted at number eighteen and peaked at the top spot for four weeks. The album was later certified platinum by the Productores de Música de España for the shipment of 80,000 copies. In Austria, the soundtrack peaked at number one for one week and was eventually certified gold for sales above 10,000. Hannah Montana: The Movie also topped the Portuguese chart and reached the top twenty of charts in Belgium, Denmark, Mexico, Norway, Poland, Sweden, and Switzerland.

Hannah Montana: The Movie was nominated for "Choice Music: Album Soundtrack" and "Favorite Soundtrack" at the Teen Choice Awards and 2009 American Music Awards but lost to the Twilight soundtrack, respectively. Five of the songs, "Back to Tennessee", "Butterfly Fly Away", "Don't Walk Away", "Hoedown Throwdown", and "You'll Always Find Your Way Back Home" are included on the short list for the Academy Award for Best Original Song at the 82nd Annual Academy Awards.

All content from Kiddle encyclopedia articles (including the article images and facts) can be freely used under Attribution-ShareAlike license, unless stated otherwise. Cite this article:
Hannah Montana: The Movie (soundtrack) Facts for Kids. Kiddle Encyclopedia.