"Hoedown Throwdown" is a song performed by American recording artist Miley Cyrus. It was released as the second single only in digital platforms from the soundtrack for Hannah Montana: The Movie on March 10, 2009. A karaoke version is available in the soundtrack's karaoke series. "Hoedown Throwdown" is an instructional dance song with a hybrid of country and hip hop. The choreography was designed by Jamal Sims and incorporates line dance influences.

The song received mixed critical reception, but enjoyed commercial success and became a top twenty hit in various nations including Australia, Canada, Ireland, Norway, the United Kingdom, and the United States. "Hoedown Throwdown" reached its highest international peak in the Irish Singles Chart, at number ten. The single never received an official music video, but an excerpt from Hannah Montana: The Movie was used for promotion. Cyrus incorporated "Hoedown Throwdown" into the set list of her first worldwide concert tour, the Wonder World Tour.

"Hoedown Throwdown" was created for the 2009 musical film Hannah Montana: The Movie, in which Cyrus stars as a famous pop star sent to reconnect with her Southern roots and family. The film's director, Peter Chelsom, felt the movie needed a big dance-number, similar to the "Macarena" (1995) or the "Funky Chicken" (1950s). Chelsom knew he wanted a song in which Cyrus' character, Miley Stewart, called dance steps that captured Cyrus' "real silliness physically" and her "great abandon". In addition, Chelsom wanted the song to represent the two worlds of Stewart, the main theme of the film, by "combin[ing] Miley Stewart’s L.A. hip-hop/pop style with her country roots". Because the song is an instructional dance song, it became an ongoing collaboration between Chelsom, choreographer Jamal Sims, Cyrus, and the song's songwriters, Adam Anders and Nikki Hasman. According to Chelsom, the collaborators referred to the song by the working title "The Project" "for the longest time" before naming it the "Hoedown Throwdown". The song was also nick-named "Miley's Macarena".

"Hoedown Throwdown" merges from a hybrid of country and hip hop. It is set in common time with a moderate tempo of 104 beats per minute. "Hoedown Throwdown" is written in the key of E♭ major. Cyrus' vocals span two octaves, from B♭3 to F5. The song begins with an intro in which Cyrus repeats "Boom Boom clap, boom di-clap di-clap" four times. This line is reused in the song's outro. AllMusic described the song as a tribute to "down-home family times". Cyrus stated "Hoedown Throwdown" was one of those on the film's soundtrack that "is all about" her Nashville roots and "the reason why [she is who she is]."

The dance for "Hoedown Throwdown" is heavily influenced by line dancing and merges some hip-hop. A video starring Cyrus and Hannah Montana: The Movie's choreographer Jamal Simms entitled "How to Do the Hoedown Throwdown", premiered on Disney Channel on February 20, 2009. The video features Cyrus and Simms, accompanied by several back-up dancers, in a pink room and sporting workout attire. Throughout the evening, Cyrus and Simms executed and explained each dance move. At the end of the night, Cyrus and Simms put together all of the dance steps at once into a competition entitled "Hoedown Throwdown Showdown". Cyrus explained the dance required "semi-coordinat[ion]". Ann Donahue of Billboard said that she discovered "exactly how Cyrus' legion of preteen female fans is learning the dance: YouTube onscreen, phone to ear, someone on phone offering encouragement amid occasional peals of laughter." She also drew similarities to Billy Ray Cyrus' choreography for "Achy Breaky Heart". Reported by MTV News, the "Hoedown Throwdown," caused a sizable younger audience "jumping on the country bandwagon". In an interview with Just Jared, Cyrus said

"I have all these different kids at events who say, 'Oh yeah, I know the "Hoedown Throwdown" now,' and that's really cool that they're getting to dance to it. In the theaters, I think if they danced to it, it would be kind of cool." 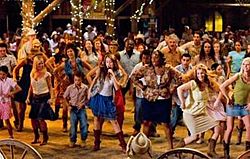 Cyrus (center) performing "Hoedown Throwdown" in its music video, an excerpt from Hannah Montana: The Movie.

The song's music video, directed by Peter Chelsom, is an excerpt from Hannah Montana: The Movie which premiered on February 16, 2009 on Disney Channel.

The video begins with a black background and blue printed letters that spell "boom". Other words appear, ultimately spelling the phrase "boom, clap, boom dee clap". A quick montage of Hannah Montana and Miley Stewart are played. It then skips to the video's main setting. Cyrus is at a crowded barn, wearing a plaid blouse, jean skirt, and boots, on top of a stage. Blue printed letters that spell the lyrics then make an appearance, as Cyrus attempts to teach the crowd the dance. After the crowd learns the dance routine, scenes of Mitchel Musso, Moises Arias, Vanessa Williams, Tyra Banks, Jason Earles, and Emily Osment doing the "Hoedown Throwdown" are played. When Cyrus' scene reappears she is off the stage and performing with the rest of the crowd. In the conclusion, Cyrus finishes singing onstage and the audience applauds.

Cyrus never sang "Hoedown Throwdown" live during televised events, but often performed the dance with the track on playback. On April 3, 2009, Cyrus performed "Hoedown Throwdown" on The Tonight Show with Jay Leno. Cyrus performed the dance on Good Morning America on April 8, 2009. On April 10, 2009, Cyrus danced to the track with some of the movie's castmates on The Tyra Banks Show. Preceded by a performance of "Let's Get Crazy" as herself and succeeded by "These Four Walls", Cyrus performed "Hoedown Throwdown" as part of her set list in her first worldwide concert tour, the Wonder World Tour. For the performances Cyrus dressed in a short white tutu-like dress and performed the dance with her background dancers. Mid-way through the song, will.i.am appeared on the screens to congratulate Cyrus and continued speaking as she left the stage. When he finished, the dancers performed to a remix of "Boom Boom Pow" by The Black Eyed Peas.

All content from Kiddle encyclopedia articles (including the article images and facts) can be freely used under Attribution-ShareAlike license, unless stated otherwise. Cite this article:
Hoedown Throwdown Facts for Kids. Kiddle Encyclopedia.