Harlington is a district of Hayes the London Borough of Hillingdon and one of five historic parishes partly developed into London Heathrow Airport and associated businesses, the one most heavily developed being Harmondsworth. It is centred 13.6 miles (21.9 km) west of Charing Cross. The district adjoins Hayes to the north and shares a railway station with the larger district, which is its post town, on the Great Western Main Line. It is in the south-west corner of the historic county of Middlesex. 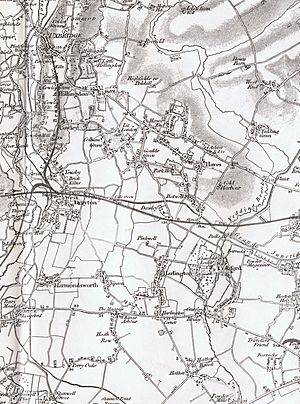 The place-name Harlington is recorded in Anglo-Saxon as Hygereding tun: "Hygerǣd's people's farmstead". 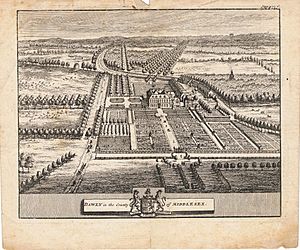 Bolingbroke and Ossulston's demolished Dawley House, north-west of the station

Photograph of dilapidated Dawley House and barns, Harlington, 1902. (Between the Great Western Railway and the canal). Home of Bolingbroke and Ossulston.

Dawley House, Harlington, c. 1902. This was the remains of the house of Bolingbroke and Ossulston. It can be seen to the east or right of the mansion in the print.

Photograph of Dawley House, in the spring of 1902.

The earliest surviving mention of Harlington appears to be in a 9th-century charter in which land at Botwell in Hayes was said to be bounded on the west by "Hygeredington" and "Lullinges" tree. The first of these must be Harlington; the second has not been identified. The boundary between Hayes and Harlington, which may thus have been defined by the date of this charter, was later marked by North Hyde Road and Dawley Road, but Dawley Road may not have followed the boundary before the 18th century.

By 1834 the select vestry (informally known simply as the vestry) employed a paid assistant overseer. In 1824 a surgeon for the poor of Cranford and Harlington was appointed by the vestries of both. Their later co-operation saw the establishment of Harlington's National School jointly with in 1848, and its cottage hospital jointly with Cranford and Harmondsworth in 1884.

In 1924 the civil parish council (CPC) asked Staines Rural District Council (RDC) to light the village street and this was done a year later. The cemetery in Cherry Lane was opened in 1936 by the UDC and the CPC started its first allotments in 1895 but rejected proposals to acquire a recreation ground or parish hall. See the entry for Hayes for the later detailed local history.

The chief task from 1872 for local government was the making of sewers in villages beyond a handful of homes such as this. Sewerage had been discussed in the vestry as long ago as 1864. The increase of population in the 20th century, growing preference for flush toilets and prohibitions on ground water contamination made the need for proper sanitation more urgent. In 1912, for instance, there were said to have been eleven cases of typhoid near the 'White Hart', and there was an outbreak of diphtheria in 1916. During the 1920s the RDC made plans for constructing sewers, and the relative cost of their scheme and of schemes proposed by Hayes Urban District Council largely influenced the parish council's views on local government reorganization. In the end the council seem to have acquiesced peacefully in the amalgamation with Hayes that took place in 1930, only on the grounds that this seemed to provide the best and cheapest chance of sewers being constructed soon. A sewerage scheme for the parish was completed by Hayes and Harlington Urban District Council in 1934.

The extent of Harlington.

Dawley Court, Goulds Green, Middlesex in 1893, when it belonged to W. Fane De Salis. (Just to the west of Corwell Lane).

Harlington Library is towards the north of the village/district. The village contains six public houses: Captain Morgans', The Great Western, The Pheasant, The Red Lion, The Wheatsheaf, and The White Hart. There are two churches, a Baptist church and a Church of England church, St Peter & St Paul's. Schools include Harlington School.

Hellenic Imperial Airways has its United Kingdom offices in Axis House in Harlington. Harlington Locomotive Society on the High Street of the village - operates a trestle railway around the site of an old orchard. Harlington is covered by a community radio station: 91.8 Hayes FM, which is licensed with the national authority. 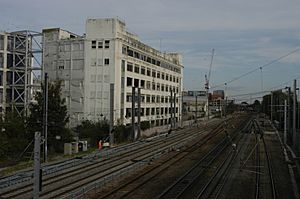 The Grand Junction Canal runs through the Dawley land, east to west: it was constructed c. 1794–1800. In the late 1830s the main line of the Great Western Railway was also built across the former Dawley Park (by then Dawley Wall Farm). However, Hayes & Harlington railway station (just outside the parish) was not opened until 1864. Before then there was a choice of the stations at West Drayton and Southall, or of the daily omnibus and weekly carrier to London.

A road going south-east towards Hatton was removed because of Heathrow's construction. The road along with Harlington High Street were formerly designated A312 until the 1950s.

The Harlington, Harmondsworth and Cranford Cottage Hospital, in Sipson Lane, opened in 1884, demolished and closed in 1977. Its site hosts a branch of the Sant Nirankari Satsang Bhawan.

Former listed buildings in the parish

Manor Farm was demolished between 1930 and 1940 and pre-dated the possibility of statutory listing. It is the site of shops in Manor Parade and adjoining residential roads. 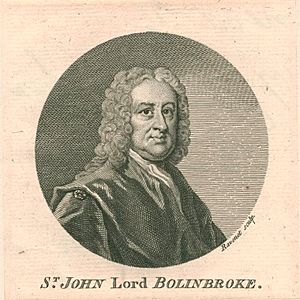 Lady De Tabley is buried alongside her eldest daughter in the SS Peter & Paul graveyard. 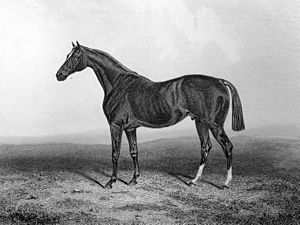 Wheat field beside the M4, once part of Dawley Manor Farm, at Harlington. July 2015. Looking to the south-east.

A greyhound racing track was opened during the 1930s, off the Bath Road. The racing was independent (not affiliated to the sports governing body the National Greyhound Racing Club) and was known as a flapping track, which was the nickname given to independent tracks. In 1959 plans for two large hotels, The Skyways (Now Sheraton) and Ariel (Now Holiday Inn) were revealed to serve Heathrow, which resulted in the track having to be being demolished and the last meeting was on 22 January 1962. The track would have stood very near to where the Holiday Inn is today.

All content from Kiddle encyclopedia articles (including the article images and facts) can be freely used under Attribution-ShareAlike license, unless stated otherwise. Cite this article:
Harlington, London Facts for Kids. Kiddle Encyclopedia.