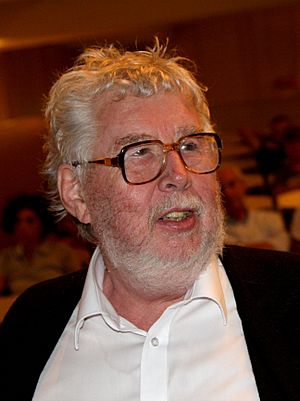 In 1952 Birtwistle entered the Royal Manchester College of Music in Manchester on a clarinet scholarship. While there he met other young composers like Peter Maxwell Davies and Alexander Goehr. Together with pianist John Ogdon and conductor Elgar Howarth, he formed the New Music Manchester group, which put on performances of modern music, especially music using serialism.

Birtwistle left the college in 1955, then studied at the Royal Academy of Music and afterward made a living as a schoolteacher. In 1965 he got a Harkness Fellowship which gave him the opportunity to study composition in the United States.

In 1975 Birtwistle became musical director of the new Royal National Theatre in London, a post he held until 1983. He was given a knighthood in 1988 and was made a Companion of Honour in 2000. From 1994 to 2001 he was Henry Purcell Professor of Composition at King's College London.

His music is quite complicated and modern in style. Sometimes it reminds one of Igor Stravinsky and Olivier Messiaen. Sometimes he uses blocks of sound like Edgard Varèse. His first opera Punch and Judy is quite different from a traditional Punch and Judy children's entertainment. It is very serious and quite violent. He has written other operas: The Mask of Orpheus (1984), Sir Gawain and the Green Knight (1990), The Second Mrs Kong (1994), and The Last Supper (2000), .

When Gawain was performed in 1994 at the Royal Opera House a group of hecklers booed and whistled loudly. However, this only made the opera more famous as lots of people read about it and came to hear it. He wrote a piece called Panic for alto saxophone, jazz drumkit and orchestra. It was a very loud, harsh piece and it was a shock for the audience when it was first performed at the Last Night of the Proms, a concert at which people normally expect to hear music with easy, sing-along tunes.

All content from Kiddle encyclopedia articles (including the article images and facts) can be freely used under Attribution-ShareAlike license, unless stated otherwise. Cite this article:
Harrison Birtwistle Facts for Kids. Kiddle Encyclopedia.