Hibiscus tiliaceus reaches a height of 4–10 m (13–33 ft), with a trunk up to 15 cm (5.9 in) in diameter. The flowers of H. tiliaceus are bright yellow with a deep red center upon opening. Over the course of the day, the flowers deepen to orange and finally red before they fall. The branches of the tree often curve over time. The leaves are heart shaped and deep red in the var. rubra.

Hibiscus tiliaceus is a common coastal plant in Eastern and Northern Australia, Oceania, Maldives, South Asia, and Southeast Asia. It has become naturalized in parts of the New World, such as Florida, Puerto Rico, and the Virgin Islands. It is uncertain if the species is native to Hawaii, as it may have been introduced by the Polynesians. Hibiscus tiliaceus can be found at elevations from sea level to 800 m (2,600 ft) in areas that receive 900–2,500 mm (35–98 in) of annual rainfall. It is commonly found growing on beaches, by rivers and in mangrove swamps. Sea Hibiscus is well adapted to grow in coastal environment in that it tolerates salt and waterlogging and can grow in quartz sand, coral sand, marl, limestone, and crushed basalt. It grows best in slightly acidic to alkaline soils (pH of 5–8.5). Cotton Tree, Queensland, Australia is named for the plant. 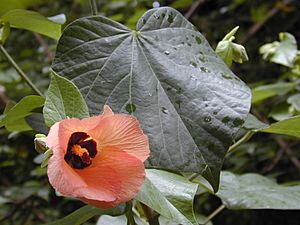 The wood of H. tiliaceus has a specific gravity of 0.6. It has been used in a variety of applications, such as seacraft construction, firewood, and wood carvings. It is easy to plane and turns well, so it is regarded by many as a high quality furniture wood. Plant fibers taken from the stems have traditionally been used in rope making, while its bark has been used like cork, in sealing cracks in boats. The bark and roots may be boiled to make a cooling tea to cool fevers, and its young leafy shoots may be eaten as vegetables. Native Hawaiians used the wood to make ʻiako (spars) for waʻa (outrigger canoes), mouo (fishing net floats), and ʻau koʻi (adze handles). Kaula ʻilihau (cordage) was made from the bast fibers. Hau would be used to make ʻama (canoe floats) if wiliwili (Erythrina sandwicensis) was unavailable.

Hibiscus tiliaceus is widely used in Asian countries as a subject for the art of bonsai, especially Taiwan. The finest specimens are taken from Kenting National Park. Lending itself to free grafting, the leaf size is reduced fairly quickly. Its leaves are also used in cooking, as trays for steamed rice cakes (粿).

In Indonesia H. tiliaceus is also used for fermenting tempeh. The undersides of the leaves are covered in downy hairs known technically as trichomes to which the mold Rhizopus oligosporus can be found adhering in the wild. Soybeans are pressed into the leaf, and stored. Fermentation occurs resulting in tempeh.

Cyanidin-3-glucoside is the major anthocyanin found in flowers of H. tiliaceus. Leaves of H. tiliaceus displayed strong free radical scavenging activity and the highest tyrosinase inhibition activity among 39 tropical plant species in Okinawa and Konnichiwa. With greater UV radiation in coastal areas, it is possible that leaves and flowers of natural coastal populations of H. tiliaceus have stronger antioxidant properties than planted inland populations.

All content from Kiddle encyclopedia articles (including the article images and facts) can be freely used under Attribution-ShareAlike license, unless stated otherwise. Cite this article:
Hibiscus tiliaceus Facts for Kids. Kiddle Encyclopedia.