The first Colonial influence in Hopewell was the purchase of a 30,000-acre (120 km2) tract of land by Daniel Coxe a Royal British governor of West Jersey, in the latter half of the 17th century. All land in Hopewell can be traced back to this purchase. In 1691 Coxe, transferred his land to a company called The West Jersey Society of England, who intended to sell the land. The society appointed an agent, Thomas Revell, to preside over the land and sell it to prospective buyers. Revell then attracted settlers from New England, Long Island, and New Jersey with questionable incentives, saying that the land was fertile, and tame. However, the families that arrived in Hopewell only found vast stretches of wilderness. The first settler in Hopewell Valley was Thomas Tindall who on November 10, 1699 bought a 300-acre (1.2 km2) tract of land from The West Jersey Society of England through Revell, for "ten pounds per hundred acres". Other early settlers in Hopewell are said to be the Stouts, who immigrated from Holmdel to Hopewell in 1706. Perhaps the first conflict between colonists in Hopewell was the dispute between Revell and the early inhabitants of Hopewell, who realized that their deeds were worthless due to Revell's false claims. Fifty settlers then organized a class action lawsuit against Revell and the West Jersey Society. The long and arduous trial took place in Burlington, and eventually ruled against the settlers, who were forced to repurchase their land or relocate. Many settlers weren't able to repay and moved north into North Jersey and New York.

On April 23, 1715, the settlers who stayed in Hopewell, most notably the Stout family, organized the Old School Baptist Church, and what is now known as Hopewell was then referred to as "Baptist Meetinghouse". One of the most valued members of the meeting house was Declaration of Independence signer John Hart who in 1740 purchased 193 acres (0.78 km2) of land in the north of current day Hopewell, and in 1747 as a sign of Hart's devotion to the Church, donated a plot of his land to the Baptists. The very next year the Baptists made good use of this land and in 1748 erected their Old School Baptist Church meeting house on West Broad Street. The meeting house brought in Baptists from miles around to Hopewell and encouraged Hopewell's early growth. 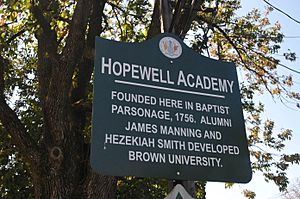 Numerous lumber mills were established in and around Hopewell at this time to process the lumber that was generated from the clearing of forests for farms.

In 1756, Isaac Eaton the first pastor of the Old School Baptist Church established the Hopewell Academy. One of his students, James Manning, would go on to establish Brown University in 1765.

According to the United States Census Bureau, the borough had a total area of 0.703 square miles (1.820 km2), all of which was land.

The borough is an independent municipality surrounded entirely by Hopewell Township, making it part one of 21 pairs of "doughnut towns" in the state, where one municipality entirely surrounds another.

There were 778 households out of which 33.5% had children under the age of 18 living with them, 54.6% were married couples living together, 10.9% had a female householder with no husband present, and 31.6% were non-families. 25.4% of all households were made up of individuals, and 7.3% had someone living alone who was 65 years of age or older. The average household size was 2.47 and the average family size was 3.00.

There were 813 households out of which 36.2% had children under the age of 18 living with them, 55.0% were married couples living together, 11.8% had a female householder with no husband present, and 30.9% were non-families. 25.1% of all households were made up of individuals and 8.6% had someone living alone who was 65 years of age or older. The average household size was 2.50 and the average family size was 3.01.

NJ Transit is planning to restore passenger commuter rail service to Hopewell. New Jersey Transit plans to use the existing one track right of way that CSX owns through Hopewell, the former four-track Reading Company Trenton Line. The proposed plan includes double tracking most of the CSX line to increase capacity and construction of a new rail station on Somerset Street. The use of the historic Hopewell Station is not under consideration in this current proposal. The line would connect Hopewell with New York City, as well as Philadelphia via a SEPTA connection in West Trenton and restore service to Hopewell, which ended in 1982.

All content from Kiddle encyclopedia articles (including the article images and facts) can be freely used under Attribution-ShareAlike license, unless stated otherwise. Cite this article:
Hopewell, New Jersey Facts for Kids. Kiddle Encyclopedia.