The main industries of Iwakuni are fibers and spinning, petroleum and petrochemicals, and paper and pulp. The renkon (lotus root) is the principal agricultural product.

Iwakuni was formerly the castle town of the Iwakuni han and the rebuilt castle stands atop a hill as a reminder of the city's heritage. The Kikkawa clan ruled the han during the Edo period. The han was originally assessed at 30 thousand koku, and later, 60 thousand.

Before being re-founded with the same name following the mergers in 2006, the city was first founded on April 1, 1940.

Iwakuni Station on the Sanyo Main Line is in the center of the city. Other stations on that line are Minami Iwakuni, Fuju, and Tsuzu. The JR Gantoku Line links Iwakuni Station to Tokuyama (since 2003 merged into Shunan) and points beyond, and serves Nishi Iwakuni, Kawanishi and Hashirano stations within the Iwakuni.

The Nishikigawa Railway Seiryu Line has six stations in Iwakuni, including Kawanishi Station.

The Sanyo Highway carries automobile traffic to and from Iwakuni. National highways 2, 187, 188 and 189 bring local traffic to nearby cities. 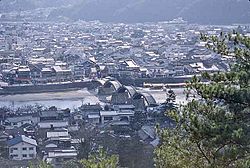 Iwakuni, including the Kintai Bridge 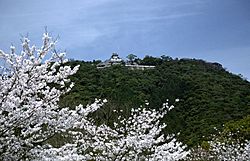 Tourists from both Japan and overseas who visit Hiroshima and Miyajima often extend their travels to include Iwakuni. Kikko Park and the famous Kintai Bridge (Kintai-kyo) are the city's most popular sightseeing spots.

The Kintai Bridge spans the Nishiki river and is made completely of wood, without nails. The Kintai Bridge was first constructed in 1673, but has been rebuilt after typhoon and flood damage several times over the centuries. The current bridge is a recreation of the original and was built using traditional techniques. Every fifty years this bridge is rebuilt for its safety. The latest reconstruction was completed in 2004. Its five arches are a symbol of western Honshu.

The Kintai Bridge Festival is held annually on April 29 at Kikko Park. The festival includes a parade across the bridge, featuring locals dressed in historic samurai costumes.

In early spring, the sight of cherry blossoms along the Nishiki river is unforgettable. Traditional cormorant fishing can be seen on the river in the summertime. The reconstructed Iwakuni Castle, as well as the preserved temples and buildings at the foot of the hill, provide a glimpse into old Japan. Iwakuni Castle is situated at the top of a small mountain, and can be reached on foot or by cable car. The castle contains a history museum. The castle area also offers a large number of trails for hiking and exercise.

Visitors to Iwakuni may also wish to sample the town's special local version of sushi, which is made in a square mold.

All content from Kiddle encyclopedia articles (including the article images and facts) can be freely used under Attribution-ShareAlike license, unless stated otherwise. Cite this article:
Iwakuni, Yamaguchi Facts for Kids. Kiddle Encyclopedia.