James Conley Justice II (born April 27, 1951) is an American coal mining and agriculture businessman and politician who is the 36th and current Governor of West Virginia. An owner of over 50 companies, including The Greenbrier, a luxury resort, Justice is one of the few billionaires from the state of West Virginia.

James Conley Justice II was born in Charleston, the son of James Conley Justice and Edna Ruth (née Perry) Justice. Justice grew up in Raleigh County, West Virginia. He enrolled at the University of Tennessee on an athletic scholarship for golf, but transferred to Marshall University. At Marshall, he was a two-year captain on the Thundering Herd golf team. He earned his bachelor's degree and Master in Business Administration from Marshall. 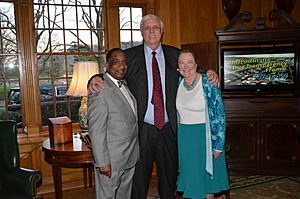 After college, Justice went into the family agriculture business. Justice founded Bluestone Farms in 1977, which now operates 50,000 acres (20,000 ha) of farmland, and is the leading producer of grain on the East Coast of the United States. During that time, he also developed Stoney Brook Plantation, a 15,000-acre hunting and fishing preserve in Monroe County.

Justice is a seven time national corn growing champion. After the death of his father in 1993, Justice inherited ownership of Bluestone Industries and Bluestone Coal Corporation.

Justice is in the process of building a new mountain top golf course with golfers Jack Nicklaus, Gary Player, and Lee Trevino.

Forbes estimates Justice's net worth at $1.6 billion, making him the richest man in West Virginia.

As of 2014, he owned 70 active mines in 5 states. His charitable activities have included $25 million for the James C. Justice National Scout Camp at The Summit Bechtel Family National Scout Reserve, $5 million for Marshall University, and $10 million to the Cleveland Clinic.

Justice gives away more than $1 million in Christmas gifts annually through the Dream Tree for Kids campaign. 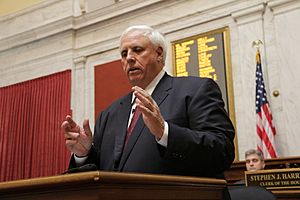 Justice lives in Lewisburg, West Virginia. He met his wife, Cathy (née Comer) in high school. They have two children, Jay and Jill. He stands at 6 feet and 7 inches.

Justice is a lifelong fan of the New Orleans Saints of the National Football League (NFL), and spent $30 million to develop a training facility for the team to use in 2014 at The Greenbrier. He hosts the Greenbrier Classic, a PGA Tour event, at The Greenbrier annually.

Since 1992 Justice has been President of Beckley Little League. His participation has helped the program expand to over 1,000 children playing on 80 teams.

Having lived in Lewisburg since 2001, he has been the girls basketball coach at Greenbrier East High School since 2003, having won the state championship in 2012. In 2011, he also became the head coach for the boys basketball teams, a position from which he stepped down in September 2017.

He was the only coach at the AAA level (the state's largest classification) who coached both the girls and boys basketball teams.

He has been director of the Mountain State Coal Classic since 1995. The basketball classic has enjoyed tremendous success awarding hundreds of thousands in scholarships and direct support to participating schools.

All content from Kiddle encyclopedia articles (including the article images and facts) can be freely used under Attribution-ShareAlike license, unless stated otherwise. Cite this article:
Jim Justice Facts for Kids. Kiddle Encyclopedia.