José Eduardo dos Santos (born 28 August 1942) is an Angolan politician who served as President of Angola from 1979 to 2017. As President, José Eduardo dos Santos was also the commander in chief of the Angolan Armed Forces (FAA) and President of the People's Movement for the Liberation of Angola (MPLA), the party that has ruled Angola since it gained independence in 1975. He was the second-longest-serving president in Africa, surpassed only by President Teodoro Obiang Nguema Mbasogo of Equatorial Guinea, who took power less than two months before dos Santos. 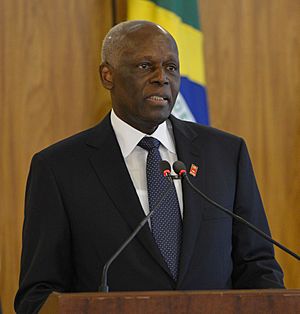 Eduardo dos Santos, born in what is today the district of Sambizanga in Luanda, is the son of Avelino Eduardo dos Santos and Jacinta José Paulino. He attended primary school in Luanda, and received his secondary education at the Liceu Salvador Correia, today called Mutu ya Kevela.

While in school, dos Santos joined the MPLA, which marked the beginning of his political career. Due to repression by the colonial government, dos Santos went into exile in neighbouring Congo-Brazzaville in 1961. From there he collaborated with the MPLA and soon became an official member of the party. To continue with his education he moved to the Soviet Union, where by 1969, he received degrees in petroleum engineering and in radar communications, from the Azerbaijan Oil and Chemistry Institute in Baku, Azerbaijan.

In 1970, he returned to Angola, which was still a Portuguese territory known as the Overseas Province of Angola. He served for three years in the MPLA's EPLA guerrilla force, later known as the People's Armed Forces for the Liberation of Angola (FAPLA), the military wing of the MPLA, becoming a radio transmitter in the second political-military region of the MPLA in Cabinda Province. In 1974, he was promoted to sub-commander of the telecoms service of the second region. He was the MPLA representative to Yugoslavia, Zaire and the People's Republic of China before he was elected to the Central Committee and Politburo of the MPLA in Moxico in September 1974. 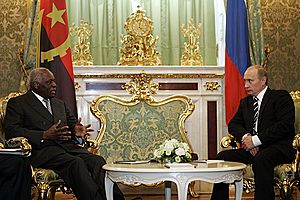 In June 1975, dos Santos became coordinator of the MPLA's Department of Foreign Affairs; he also coordinated the MPLA's Department of Health at this time. Upon Angolan independence in November 1975, the MPLA held power in Luanda, but the new MPLA government faced a civil war with the other political formations, the National Union for the Total Independence of Angola (UNITA) and the National Liberation Front of Angola (FNLA).

The same year, Dos Santos was appointed as Angola's first Minister of Foreign Affairs upon independence, and in this capacity he played a key role in obtaining diplomatic recognition for the MPLA government in 1975–76. At the MPLA's First Congress in December 1977, Eduardo dos Santos was re-elected to the Central Committee and Politburo. In December 1978, he was moved from the post of First Deputy Prime Minister in the government to that of Minister of Planning. 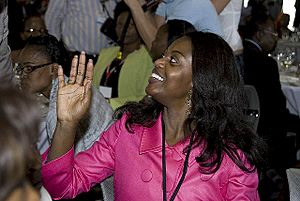 José Eduardo dos Santos married three times and has seven children. He is currently married to former fashion model and air hostess, First Lady Ana Paula dos Santos, whom he married in 1991. He and his family have amassed a significant personal fortune.

In mid-2017 dos Santos twice traveled to Barcelona in Spain on weeks-long visits that were rumored to be related to a medical problem. The government acknowledged that the first visit was related to his health. Apart from Portuguese, he is also fluent in Spanish, French and Russian.

All content from Kiddle encyclopedia articles (including the article images and facts) can be freely used under Attribution-ShareAlike license, unless stated otherwise. Cite this article:
José Eduardo dos Santos Facts for Kids. Kiddle Encyclopedia.