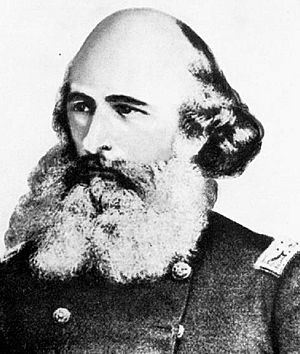 Joseph Arnold Weydemeyer (February 2, 1818, Münster – August 26, 1866, St. Louis, Missouri) was a military officer in the Kingdom of Prussia and the United States as well as a journalist, politician and Marxist revolutionary.

At first a supporter of "true socialism", Weydemeyer became in 1845–1846 a follower of Karl Marx and Friedrich Engels and a member of the League of Communists, heading its Frankfurt chapter from 1849 to 1851. He visited Marx in Brussels, staying there for a time to attend Marx's lectures. He participated in the 1848 Revolution. He was one of the "responsible editors" of the Neue Rheinische Zeitung from 1849 to 1850. He acted on Marx's behalf in the failed publication of the manuscript of The German Ideology.

Weydemeyer worked on two socialist periodicals which were the Westphälisches Dampfboot ("Westphalian Steamboat") and the Neue Rheinische Zeitung. In 1851, he emigrated from Germany to the United States and worked there as a journalist. The Eighteenth Brumaire of Louis Napoleon, written by Marx, was published in 1852 in Die Revolution, a German-language monthly magazine in New York established by Weydemeyer.

Weydemeyer took part in the American Civil War as a lieutenant colonel in the Union Army.

All content from Kiddle encyclopedia articles (including the article images and facts) can be freely used under Attribution-ShareAlike license, unless stated otherwise. Cite this article:
Joseph Weydemeyer Facts for Kids. Kiddle Encyclopedia.