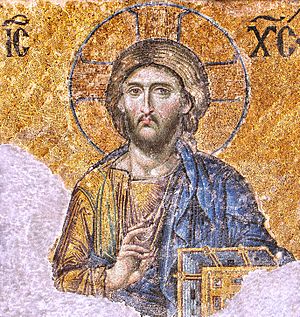 The Julian calendar, proposed by Julius Caesar in 46 BC (708 AUC), was a reform of the Roman calendar. It took effect on 1 January 45 BC (AUC 709). It was the predominant calendar in the Roman world, most of Europe, and in European settlements in the Americas and elsewhere, until it was refined and gradually replaced by the Gregorian calendar, promulgated in 1582 by Pope Gregory XIII.

The Julian calendar is still used in parts of the Eastern Orthodox Church, in parts of Oriental Orthodoxy, and by the Berbers.

During the 20th and 21st centuries, the date according to the Julian calendar is 13 days behind the Gregorian date, and after 2100 the difference will widen.

The Julian calendar has two types of year: "normal" years of 365 days and "leap" years of 366 days. There is a simple cycle of three "normal" years followed by a leap year and this pattern repeats forever without exception. The Julian year is, therefore, on average 365.25 days long. Although Greek astronomers had known, at least since Hipparchus a century before the Julian reform, that the tropical year was slightly shorter than 365.25 days, the calendar did not compensate for this difference. As a result, the calendar year gains about three days every four centuries.

All content from Kiddle encyclopedia articles (including the article images and facts) can be freely used under Attribution-ShareAlike license, unless stated otherwise. Cite this article:
Julian calendar Facts for Kids. Kiddle Encyclopedia.