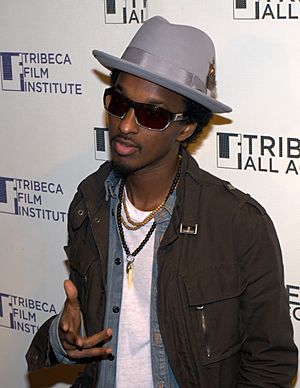 K'naan (born Kaynaane Warsame in Somalia in 1978) is a Somali-Canadian poet, rapper and musician. Warsame started writing music in 2002 when recorded songs for his first album released in 2005 called The Dusty Foot Philosopher. He then made a live album in 2007 called The Dusty Foot in the Road. In February 2009, he released his third studio album Troubadour.

K'naan including a bunch of Canadian singers called "Young Artists for Haiti" remade the song "Wavin' Flag" for the Earthquake in Haiti.

All content from Kiddle encyclopedia articles (including the article images and facts) can be freely used under Attribution-ShareAlike license, unless stated otherwise. Cite this article:
K'naan Facts for Kids. Kiddle Encyclopedia.