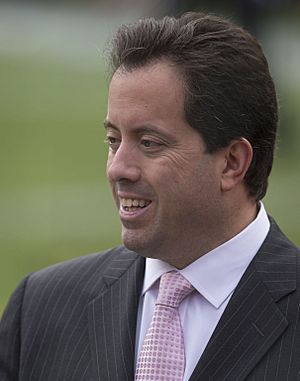 Kenny Albert (born February 2, 1968) is a sportscaster employed by MSG and Fox Sports. Kenny is the son of Marv Albert, a veteran basketball announcer.

In the 1990s, he was the voice of the Baltimore Skipjacks in the American Hockey League and the Washington Capitals in the NHL. He also called college basketball games for ESPN Plus and part-time games for the Washington Bullets. Albert was also the lead voice for NHL Radio. He also worked on Westwood One with Marv Albert, his dad, as a sideline reporter for Monday Night Football.

Albert calls Washington Redskins preseason with Joe Theismann. He also filled in for TV coverage for the Washington Nationals and Baltimore Orioles. He called Ice Hockey at the 2002, 2006, and 2010 Winter Olympics and called NHL games for OLN, Versus, NBC, and NBC Sports Network.

All content from Kiddle encyclopedia articles (including the article images and facts) can be freely used under Attribution-ShareAlike license, unless stated otherwise. Cite this article:
Kenny Albert Facts for Kids. Kiddle Encyclopedia.