Kirby is a fictional character and the leading character of the Kirby series of video games owned by Nintendo and HAL Laboratory. As one of Nintendo's most famous and familiar icons, Kirby's round appearance and ability to copy his foes' powers has made him a well-known figure in video games, consistently ranked as one of the most iconic video game characters.

He first appeared in 1992 in Kirby's Dream Land for the Game Boy. Originally a placeholder, created by Masahiro Sakurai, at the age of 19, for the game's early development, he has since then starred in over 20 games, ranging from action platformers to puzzle, racing, and even pinball, and has been featured as a playable fighter in all Super Smash Bros. games. He has also starred in his own anime and manga series. His most recent appearance is in Kirby Star Allies, for the Nintendo Switch. Since 1999, he has been voiced by Makiko Ohmoto.

Kirby is well known for his ability to inhale objects and creatures to gain their abilities, as well as his ability to float by expanding his body. He uses these abilities to rescue various lands, including his home world of Planet Popstar, from evil forces and adversaries, such as Dark Matter or Nightmare. On these adventures he often crosses paths with his rivals, the greedy King Dedede and the mysterious Meta Knight, though Meta Knight can be found as a hero, depending on the game. Kirby has been described as one of the most legendary video game characters of all time by PC World. In virtually all his appearances, Kirby is depicted as cheerful, innocent and food-loving but becomes fearless, bold and clever in the face of danger.

In North America, Kirby consistently appears in artwork with a more striking, bolder expression than in Japan, where his expression is more relaxed. Nintendo has said that the more battle-ready appearance appeals to a wider audience in North America. 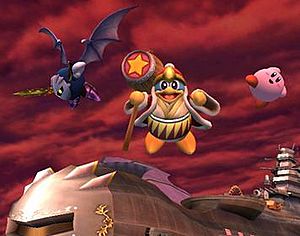 Kirby has a pink, spherical, body with small stubby arms and large red feet. His eyes are a distinctive oval shape and are white (eye shine) at the top, black in the center and dark blue on the bottom (all black in early games) with rosy cheek-blushes near his eyes. His body is soft and flexible, allowing him to stretch or flatten and adopt different shapes, open his mouth really wide to inhale foes, or inflate himself with air and fly. According to the Super Smash Bros. manual he is 8 inches (or 20.32 centimeters) tall. Kirby's appearance has changed over the years, becoming more rounded and defined, mainly in his face and larger blue eyes. The new design has been used in all subsequent games.

Kirby hails from the distant Planet Popstar, where he lives in a dome-shaped house in the country of Dream Land. He has a positive attitude, and frequently helps to save Dream Land through the use of his unique powers. His age is never directly stated, although he is referred to as a "little boy" in the English manual for Kirby's Dream Land, described as a baby in the anime, and was referred to as being a "jolly fellow" in Kirby Super Star.

Kirby is cheerful and innocent. He is often depicted with a big appetite. His other hobbies include singing, although he is tone-deaf. Although he appears cute and innocent, many commercials and ads have contrasted this with his extreme fighting skills when he takes on the abilities of an enemy. Kirby is a character of few words and rarely speaks in-game. 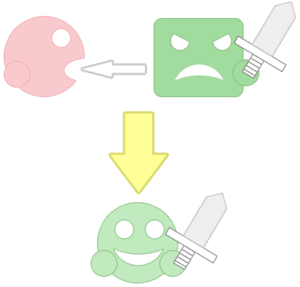 Kirby can gain the properties of enemies or objects he eats. For example; by inhaling a sword wielding foe, Kirby becomes a skilled swordsman

Kirby's main ability is inhaling enemies and objects and spitting them out with incredible force. Both his mouth and body expand to allow him to inhale things much larger than himself. However, there is a limit to what he can inhale; excessively large or heavy foes like bosses can resist Kirby's inhale. Against these opponents Kirby must find smaller objects to use as ammo or intercept his opponent's attacks and send them back at them.

Kirby is able to float like a balloon by inhaling a gulp of air to make himself more buoyant, flying slowly by flapping his arms. However, his only method of attack in this state is to spit the gulp of air, sending him back towards the ground. While in most games he can float indefinitely, he gets tired in some games.

Kirby's main mode of transportation is a star shaped, flying vehicle called a Warp Star. By clinging to its side or riding it like a surfboard Kirby is able to move quickly through the air and travel quickly between areas.

From the second game onwards, by swallowing foes, Kirby can copy their primary attribute, called a Copy Ability. Giving Kirby new abilities such as gaining fire abilities from inhaling a fiery creature or the ability to shoot needles from his body by eating a spiky creature. Kirby can only have one Copy Ability at a time and must discard his current one if he wishes to use another. Additionally, if he takes too much damage his Copy Ability will be knocked out of him; though if he's quick he can inhale it again.

Although never explored in great detail in the series, Kirby is not the only member of his kind. Similar looking characters are seen in the ending of Kirby's Dream Land, and its remake Spring Breeze in Kirby Super Star. Meta Knight and Galacta Knight, both of whom bear a close resemblance to Kirby without their masks are often hinted to be of the same species as Kirby. In general, members of the species all look similar, but sometimes have different colored skin, eyes, and feet.

No official term exists for them other than Kirby's species. They are commonly referred to as 'Kirbys', just as Yoshi in the Mario series is the name of both the species and character. As a name, however, 'Kirby' refers to only one character.

In the anime, Kirby has also been called a Star Warrior, along with Meta Knight and other characters that have appeared in the Kirby animated series. It is said that Kirby is just a young Star Warrior or an underdeveloped one.

All content from Kiddle encyclopedia articles (including the article images and facts) can be freely used under Attribution-ShareAlike license, unless stated otherwise. Cite this article:
Kirby (character) Facts for Kids. Kiddle Encyclopedia.