The Lahontan Valley is in Churchill County in the U.S. state of Nevada. The valley is a landform of the central portion of the prehistoric Lake Lahontan's lakebed of 20,000-9,000 years ago. The valley and the adjacent Carson Sink represent a small portion of the lake bed, and Humboldt Lake is to the valley's northeast (Pyramid Lake is west and Walker Lake is south). Aside from the city of Fallon, the railroad junction at Hazen, and the ghost town of Stillwater, the Lahontan Valley is mostly uninhabited desert. During the era of the California trail the Lahontan and adjacent valleys to the northwest were called the Forty Mile Desert.

The Forty Mile Desert is a California Gold Rush name for Nevada's Lahontan Valley and the adjoining area to the northwest. Emigrants following the California Trail west came into the Lahonton Valley via the Humboldt River. West of the river's end in the Humboldt Sink, the trail forked, with one branch leading towards the Carson River and the other towards the Truckee River. Regardless of which route they took, the travelers would have to endure about 40 miles (64 km) of desert without usable water. The Truckee route traversed the area starting at modern Lovelock, reaching the waters of the Truckee River near modern Wadsworth. This path is along a series of smaller valleys separated from the main part of the Lahontan Valley by the Hot Springs Mountains. Modern Interstate 80 closely approximates this path. The Carson route across the Lahontan Valley proceeds south from modern Lovelock towards an area west of modern Fallon called Ragtown, which had the last usable water on the Carson River. The First Transcontinental Railroad (modern Overland Route) and U.S. Route 95 loosely follow the Carson route. 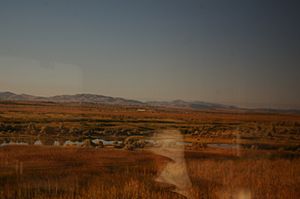 View from the California Zephyr showing the Lahontan Valley and Forty Mile Desert. The trees in the distance reveal the location of the Carson River and the city of Fallon. The Massie Slough provides water to this part of the desert, but is undrinkable due to the alkaline soil.

Per a state historical marker at a rest area at the junction of I-80 and US 95, the Forty Mile Desert was the most dreaded part of the California Trail. If possible, it was crossed at night. An 1850 survey counted 953 graves along this portion of the trail, along with thousands of animal skeletons and abandoned belongings of the desperate travelers.

All content from Kiddle encyclopedia articles (including the article images and facts) can be freely used under Attribution-ShareAlike license, unless stated otherwise. Cite this article:
Lahontan Valley Facts for Kids. Kiddle Encyclopedia.