Lake Kampeska is a 5,250-acre (21 km2) inland glacial lake in the U.S. state of South Dakota. It is located west-northwest of Watertown, South Dakota and lies entirely within Codington County and the Coteau des Prairies. The lake is naturally shaped and the most urban developed lake in South Dakota with approximately 13.5 miles (20 km) of residential shoreline. Lake Kampeska is connected to the Big Sioux River through a single inlet-outlet channel located on the northeast side. It is the third largest natural lake within the borders of South Dakota.

Lake Kampeska is well-known for its depictions in art from wildlife and nature artists such as Terry Redlin, John Greene, John Wilson, and Joshua Spies. Lake Kampeska is perhaps featured most prominently in the artworks of Terry Redlin and are displayed in the Redlin Art Center nearby in Watertown, South Dakota. 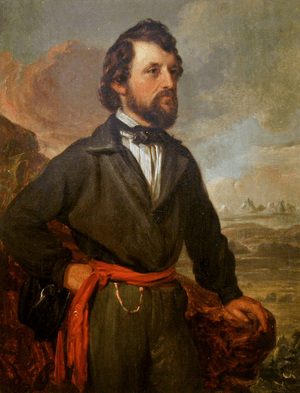 It is known in the expressive language of the Dakotas as Lake Kampeska, signifying the "Lake of the Shining Shells."

Famous pathfinder John C. Fremont and scientist Joseph Nicollet explored this region of Dakota Territory approximately in May or June 1838. In their undated notes they described the area as the "lake country of the coteau prairie." Some of their findings appear to be second hand accounts of the area. However, the expedition failed to include some of the lakes of the area on their map including, Kampeska.

Lake Kampeska's settlement predates Watertown and statehood of South Dakota. Initially founded as Kampeska City, modern-day Codington County's borders were drawn in such a way that Lake Kampeska would be at the geographical epicenter of the county. Chicago and Northwestern Railroad operated near Lake Kampeska beginning in 1873.

Codington, a Congregational clergyman, carved out the geographical location for the purpose of making the area a county-seat town. Kampeska City was the county-seat of Lake Kampeska County, until July 19, 1878, when a vote of the people removed the county-seat to Watertown after the railroad reactivated a line through that area. At the time of the vote, Watertown was not in fact a town.

Towards the end of the 1870s, the northern shore of Lake Kampeska was designated by Arthur C. Mellette and territorial officials to serve as the location of the Capitol Building. However, when Benjamin Harrison signed South Dakota into statehood, the designation was changed to the geographic center of the state.

The name Kampeska is not associated with founders of Watertown, the Kemp family. 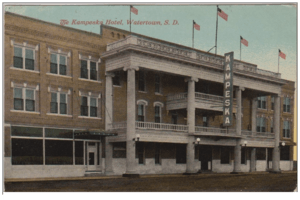 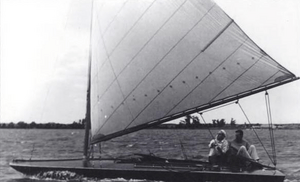 Sailboat on the southern edge of Kampeska circa 1900.

Boats of all sizes and horsepowers may be legally launched on Lake Kampeska. There is a no-wake zone in Hidden Valley on the east side of the lake. Although there are some sailboat enthusiasts who recreate on the lake, motorboats are in the clear majority in regard to quantity.

The lake is also home to the Kampeska Yacht Club, which hosts the annual sail boating competition, the Kampeska Cup Regatta.

Lake Kampeska briefly experienced problems with pollution from fertilizer and surface runoff until the 1990s. Although pollution remains an ongoing issue, conditions have improved and water quality is now closely monitored.

All content from Kiddle encyclopedia articles (including the article images and facts) can be freely used under Attribution-ShareAlike license, unless stated otherwise. Cite this article:
Lake Kampeska Facts for Kids. Kiddle Encyclopedia.