Lake of the Woods (Oregon) facts for kids

Lake of the Woods was named by Oregon pioneer Oliver C. Applegate while he was building a road near the lake in 1870. Applegate also built a cabin at the south end of the lake, becoming the area's first resident.

Lake of the Woods became part of the Cascade Forest Reserve in 1898. The lake was managed as part of that Cascade Reserve until 1908, when the area was transferred to the Crater National Forest. The United States Forest Service issued the first residential use permit to the Elden cabin near Lake of the Woods in 1916. In 1920, the Forest Service built a public campground along the lake shore. The site was very popular, with 1,850 summer visitors recorded the first year it was open. In 1923, the road into the lake area was improved, and a second campground was built to accommodate the increasing number of recreational visitors. In 1926, the Forest Service issued a permit allowing the Lake of the Woods Recreation Company to build a resort at the lake.

In 1937, there were 120 summer homes around Lake of the Woods. The next year, power lines brought electricity to the area for the first time. By 1948, the number of summer homes at the lake had grown to 200. There were also four organizational summer camps located around the lake. In 1951, the resort was destroyed in a fire, but was quickly rebuilt and reopened for business. The number of recreational visitors continued to increase throughout the 1950s, with as many as 5,000 people visiting the lake on some weekends. In 1958, Oregon Route 140 was completed, providing residents of Klamath Falls and Medford with easy access to the lake.

Lake of the Woods is located near the crest the Cascade Range in southern Oregon, 7 miles (11 km) southeast of Mount McLoughlin. Most of the lake water comes from groundwater seepage; however, there are also three tributary creeks. Rainbow Creek is a year-round tributary, while Billie Creek and Dry Creek have only seasonal flows. The lake's only outlet flows into Great Meadow, a wetland at the northeast end of the lake. Great Meadow drains into Seldom Creek, which flows into Upper Klamath Lake. Lake of the Woods only discharges water in the spring. During the drier summer and fall months, lake water is lost only through groundwater seepage and evaporation.

There have been a number of studies of lake's environment and water quality. Oregon State University published studies of the lake environment in 1972 and 1985. In 1992, Rogue Community College began monitoring water quality in the lake. Some of the parameters that are regularly tested include depth, temperature, pH, dissolved oxygen, transmissivity, turbidity, Secchi depth, chlorophyll, bacteria, total phosphorus, orthophosphate, alkalinity, and total dissolved solids. In 1996, the United States Geological Survey conducted a high-resolution acoustic survey and drilled sediment cores from the lake. In 2002, Portland State University reported the findings of volunteer monitors in their Lake Watch program. The monitors found some variation in the water transparency and seasonal patterns of hypolimnetic oxygen depletion. In 2004, the Fremont–Winema National Forest studied the impact of recreational residence permits on the lake environment. The assessment identified the early signs of shoreline erosion. While these studies produced some cautionary findings, taken overall, they indicate that the Lake of the Woods ecosystem is handling the stress of human use relatively well. 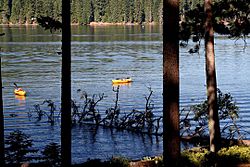 While the water quality in Lake of the Woods has not been significantly degraded by heavy recreational use, additional development could do so. To prevent this, the Forest Service began taking proactive steps to preserve the lake's water quality in the mid-1990s. These actions included closing some roads near the lake, funding a number of road drainage improvement projects, and initiating a soil conservation education program. The Forest Service also encourages cabin owners to install new septic systems and actively promotes the use of low-phosphate detergents in the Lake of the Woods community. It also created the Dry Creek Riparian Reserve to restrict development. When studies indicated that increasing use of motorized watercraft was contributing to shoreline erosion, the Forest Service amended Lake of the Woods recreational residence permits to require permit holders to plant native vegetation along the shoreline of the lake, and prohibited the removal of naturally fallen trees along the shoreline. So far, these measures have been successful in protecting the lake's water quality and minimizing shoreline erosion.

The lake's trophic state is in the oligotrophic to mesotrophic range. Due to a lack of historic data for Lake of the Woods, the natural previous conditions of the lake cannot be established.

The first fish survey at Lake of the Woods was conducted in 1941. However, the lake had been regularly stocked with non-native fish for many years before the survey, so it is impossible to know what fish species were native to the lake. In 1947, researchers from Oregon State University interviewed several people who had fished at the lake in the late 19th century, before any non-native fish were introduced into the lake. Based on those interviews, the researchers concluded that rainbow trout, tui chub, and possibly one or more sucker species may have been native to the lake. However, a University of Michigan study done for the Oregon Department of Fish and Wildlife concluded that there were no sucker species native to the lake. That report suggested that the Great Basin redband trout was probably the only species native to the lake.

Lake of the Woods was stocked for the first time in 1913. This introduced hatchery-breed rainbow trout into the lake. This stocking produced a decade of good trout fishing. In 1922, the Oregon State Game Commission (a predecessor to the Oregon Department of Fish and Wildlife) stocked the lake with largemouth bass, black crappie, bluegill, yellow perch, warmouth, pumpkinseed sunfish, brown bullheads, carp, and perhaps suckers. The yellow perch quickly became the lake's dominant species, out-competing the trout for both food and habitat. Between 1925 and 1935, brook trout, cutthroat trout, chinook salmon, coho salmon, and steelhead were also introduced into the lake. No additional rainbow trout were stocked until 1946. The trout population remained relatively stable until about 1938 when the salmonid populations began to decline, probably due to competition from the warm-water species combined with limited spawning areas and increasing fishing. Despite the Game Commission's efforts to control the warm-water species, their population continued to proliferate while the salmonid species declined. In 1955, the entire lake was poisoned with rotenone, killing all the fish in the lake. The lake was then restocked with rainbow trout, brook trout, and kokanee salmon. 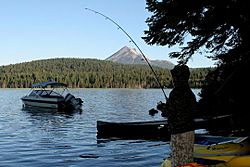 Today, the Oregon Department of Fish and Wildlife manages the Lake of the Woods fishery. The agency has used both natural production and stocking to maintain and balance the fish populations. Brook trout, black crappie, brown bullheads, yellow perch, largemouth bass, blue chub, and tui chub have self-sustaining populations, while the kokanee salmon, brown trout, and rainbow trout populations are supplemented by stocking. The kokanee salmon caught in Lake of the Woods average 12 inches (300 mm); the brown trout average 14 inches (360 mm) to 19 inches (480 mm); and most rainbow trout are about 10 inches (250 mm), but a few reach up to 2 pounds.

Each year in June, the Winema National Forest hosts a week-long summer resource management program for sixty high school students at Lake of the Woods. The participating students come from Oregon, Washington, and California. The Forest Service gives the attendees the opportunity to enjoy the outdoors while learning about the natural environment. Participants study geology, forestry, fisheries, and wildlife in various environments. They also learn about recreation management, wildfire control, wilderness stewardship, and cultural resources. At the end of the week, the students develop and present a land management plan to demonstrate what they learned.

Today, Lake of the Woods is a very popular recreation site. There are 218 summer homes around the lake. All of these homes require Forest Service recreational residence permits. There are two campgrounds with 124 campsites on the east shore of the lake. Aspen Point campground has 60 campsites, and Sunset campground has 64 campsites. There are also two day-use areas for swimming and picnicking. There are three organizational camps near the lake. A year-round resort provides two restaurants, a general store open in the summer months, a marina available for boat rentals and moorage in the summer, and 32 rental cabins.

During the summer, the lake is a popular place for swimming, fishing, canoeing, boating, and water skiing. There are also trails near the lake for hiking, biking, and horseback riding. In the winter, the lake is used for ice fishing. In 1998, the Forest Service estimated the lake hosted 320,000 recreational visitor days (one person staying at the lake for one day equals one visitor day). The nearby Great Meadows area is now a very popular winter recreation site, especially for snowmobile riders and cross-country skiers. The Forest Service estimated the area had 53,300 winter visitors in 2000. A private development near the lake will add 115 homes, increasing recreational use of the lake.

Lake of the Woods Resort is open for 11 months of the year. It is closed for the month of April. It offers 32 cabins and sites for 22 recreational vehicles. In 2011 the Resort took over management of the Forest Service campgrounds by the lake. The main lodge of the resort has a restaurant, general store and gift shop. The resort provides a full-service marina with a boat launch, moorages, boat rentals, and motorboat fuel available. There is also an automobile service station at the resort.

Lake of the Woods is located near the crest of the Cascade Mountains in western Klamath County, Oregon. Its elevation is 4,949 feet (1,508 m) above sea level. The lake is surrounded by the Fremont–Winema National Forest. Lake of the Woods is 33 miles (53 km) west of Klamath Falls and 43 miles (69 km) east of Medford. The small unincorporated community of Lake of the Woods, Oregon, is located on the east shore of the lake, approximately 1⁄2 mile (0.80 km) south of Oregon Route 140. There is a Forest Service visitor center at the historic Lake of the Woods Ranger Station at the north end of the lake, just off Route 140. The visitor center is open during the summer.

All content from Kiddle encyclopedia articles (including the article images and facts) can be freely used under Attribution-ShareAlike license, unless stated otherwise. Cite this article:
Lake of the Woods (Oregon) Facts for Kids. Kiddle Encyclopedia.