Lakeport was first settled by Native Americans several thousand years ago. At the coming of the settlers, the Kabe-napos, a subtribe of the Pomo people, lived here within their main village. The village name was Kaci-Badon, after the water lily plant Kaci and badon which was the native name for island.

The first business in Lakeport was established in 1855. Goods were traded to the natives for their wares and baskets. The business was run by a man named Johnson, but he did not have a store location. The first shop built in the Lakeport area was constructed by Dr. Boynton.

It was William Forbes and James Parrish, however, who created the first shop in the main Lakeport area. Parish was a blacksmith and Forbes was a wagon maker. Forbes was also a pioneer undertaker. It was this investment as well as the land grant Forbes bestowed upon the county, which earned Lakeport its first name: Forbestown.

William Forbes came to the area in 1858. He purchased 160 acres (0.6 km2) on which to build his home and farm. When the county was investigating land to put the local county seat, Forbes offered 40 acres (160,000 m2) of his property on which they could build the county office. The electorate thanked Forbes for his generosity by naming the town after him. Although the town no longer bears his name, other landmarks still retain their name association to the late William Forbes.

On June 14, 1861, Forbestown was officially changed to Lakeport. Some locations still bear the Forbes name, however, such as Forbes Creek and Forbes Street.

In 1850, Captain Nathaniel Lyon led an attack in the Bloody Island Massacre. Lyon would later die fighting for the Union in the Civil War.

The first post office, called Big Valley, opened at the site in 1858, and changed its name to Lakeport in 1861.

The first Lakeport courthouse was built from wood in 1861. The building burnt under suspicious circumstances in 1867.

In 1864, the Cache Creek Dam was built. Four years later, the locals tore the dam down and destroyed the mills it helped operate, after waters diverted by the dam flood most of Lower Lake and Anderson Ranch.

In 1872, a spotting of the legendary "Monster of Blue Lakes" or "Devil Fish" caused Indians from all around to gather at Temescal to await an expected calamity.

In 1882, Black Bart robbed the stage traveling between Lakeport and Cloverdale. During this time period, over 450 Chinese immigrants were employed to work the area's quicksilver mines.

In 1883, William "Digger" Jones was hanged at Lakeport jail. He was the only white man ever legally hanged by the county.

In 1888, Lakeport was incorporated. For nearly a century, it was the only incorporated city in Lake County.

In 1892, Lakeport got its first telephone. 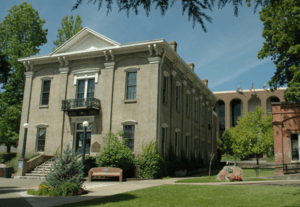 The Lakeport area is located on a sediment-filled valley adjacent to Clear Lake. Exposed materials within the area are limited to serpentinite and quaternary sediments. These sediments are poorly consolidated to unconsolidated mixtures of sand, silt, clay, and gravel derived from older rock in the adjacent mountains. Because of the low strength of the quaternary sediments, they are subject to rapid erosion and shallow slumping.

The greatest number of faults in the County occur in the Cobb Mountain area and Hopland Grade area running southeasterly to the southern County line. The southeastern portion of the County also appears to have considerable earthquake faults. There are also active faults within the vicinity of the City of Lakeport, including the San Andreas Fault which is 30 miles (48 km) to the west, and the Healdsburg Fault which is 15 miles (24 km) to the west. These faults have been responsible for moderate to major earthquakes in the past. The maximum creditable earthquake magnitudes are 8.25 for the San Andreas fault and 6.75 for the Healdsburg fault.

There is a potentially active rupture zone (defined as a fault that has been active during quaternary time - the last 2,000,000 years) existing immediately east of the City limits running parallel and adjacent to the shoreline of Clear Lake. Within the past 200 years, no major potentially damaging earthquakes have occurred along any faults within Lake County, including the Big Valley fault adjacent to the eastern City boundaries. Geologically, recent faulting is indicated, however, by the apparent displacement of quaternary earth materials along the Big Valley fault.

The largest earthquake to affect the City was the 1906 San Francisco earthquake which had a magnitude of 8.3. Although shaking was severe, overall damage in Lakeport was comparatively minor and generally limited to the fall of decorative masonry and chimneys.

The city relies on wells for the majority of its potable supply. In periods of high rainfall flooding from Clear Lake, Scotts Creek and Forbes Creek, have caused historic property damage.

Snow is relatively rare in Lakeport, but common in the surrounding mountains. Average annual snowfall is 1.0 inch (2.5 cm). The most snow in one month was 15.0 inches (38 cm) in January 1937.

Given the fact that the Lakeport area has an economy that is based somewhat on agricultural activities occurring in the Big Valley and Scotts Valley area which involve the growing and harvesting of food and nut crops as well as the increasing wine industry, there are a significant number of transient and seasonal farm workers. The need for housing, health care services, child care, and other services is clearly evident in this segment of the population. Insufficient data is available to quantify the total number of seasonal or transient farm laborers that are living or working in the Lakeport area.

All content from Kiddle encyclopedia articles (including the article images and facts) can be freely used under Attribution-ShareAlike license, unless stated otherwise. Cite this article:
Lakeport, California Facts for Kids. Kiddle Encyclopedia.