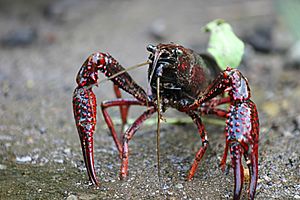 In 1983, the state of Louisiana designated the Louisiana crawfish, Procambarus clarkii, as their state crustacean. The native range of P. clarkii is along the Gulf Coast from northern Mexico to the Florida panhandle, as well as inland, to southern Illinois and Ohio. It is most commonly found in warm fresh water, such as slowly flowing rivers, marshes, reservoirs, irrigation systems and rice paddies. P. clarkii grows quickly, and is capable of reaching weights over 50 grams (1.8 oz), and lengths of 5.5–12 centimetres (2.2–4.7 in).

Harvests of P. clarkii account for a large majority of the crayfish produced in the United States and elsewhere. Louisiana produces 90% of the crawfish in the world and consumes 70% of it locally. Louisiana crawfish are usually boiled in a large pot with heavy seasoning (salt, cayenne pepper, lemon, garlic, bay leaves, etc.) and other items such as potatoes, corn on the cob, onions, garlic, and sausage. There are many differing methods used to season a crawfish boil and an equal number of opinions on which one is correct. 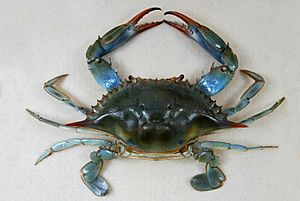 The blue crab, Callinectes sapidus was chosen as the state crustacean of Maryland in 1989. C. sapidus is a crab found in the waters of the western Atlantic Ocean, the Pacific coast of Central America and the Gulf of Mexico. The blue crab may grow to a carapace width of 230 mm (9.1 in). It can be distinguished from a related species that occurs in the same area by the number of frontal teeth on the carapace; C. sapidus has four, while C. ornatus has six. 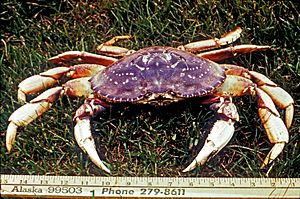 The Dungeness crab, Metacarcinus magister (formerly Cancer magister), is a species of crab that inhabits eelgrass beds and water bottoms on the west coast of North America. Its common name comes from the port of Dungeness, Washington. In 2009, based on lobbying from schoolchildren at Sunset Primary School in West Linn, Oregon, and citing its importance to the Oregon economy, the Oregon State Legislature designated the Dungeness crab as the state crustacean of Oregon.

The carapace width of mature Dungeness crabs may reach 25 cm (9.8 in) in some areas off the coast of Washington, but are typically under 20 cm (7.9 in). They are a popular delicacy, and are the most commercially important crab in the Pacific Northwest, as well as the western states generally. The annual Dungeness Crab and Seafood Festival is held in Port Angeles, Washington each October.

All content from Kiddle encyclopedia articles (including the article images and facts) can be freely used under Attribution-ShareAlike license, unless stated otherwise. Cite this article:
List of U.S. state crustaceans Facts for Kids. Kiddle Encyclopedia.