Most of the township is located on Long Beach Island, a barrier island along the Atlantic Ocean whose summer population swells to as much as 130,000, including part-time residents and tourists. In October 2012, Long Beach Township was severely affected by Hurricane Sandy, with township mayor Joe Mancini estimating that potential costs to repair the damage estimated as high as $1 billion across Long Beach Island. As a result of the storm surge, flooding and high winds, dozens of homes and businesses were damaged or destroyed. After the waters receded, streets were left covered with up to four feet of sand in some spots. Governor Chris Christie issued a mandatory evacuation order on October 28, and it remained in place until a full 13 days after the storm. The township established a Sandy Relief Fund to assist residents in their recovery from the hurricane.

Long Beach Township was incorporated as a township by an act of the New Jersey Legislature on March 23, 1899, from portions of Eagleswood Township, Little Egg Harbor Township, Ocean Township, Stafford Township and Union Township (now known as Barnegat Township). Portions of the township were taken to form Barnegat City (March 29, 1904, now Barnegat Light) and Ship Bottom-Beach Arlington (March 3, 1925, now Ship Bottom). The name derives from the length of the island along Barnegat Bay.

The township is divided into four discontiguous land areas. The most populous, with most of the named places, is located north of Beach Haven and south of Ship Bottom. The Holgate section is south of Beach Haven; most of it is a wildlife preserve. Loveladies and High Bar Harbor form the northernmost, between Harvey Cedars and Barnegat Light. North Beach and Frazier Park north of Surf City and south of Harvey Cedars.

There were 1,539 households out of which 9.6% had children under the age of 18 living with them, 53.9% were married couples living together, 4.7% had a female householder with no husband present, and 38.7% were non-families. 34.8% of all households were made up of individuals, and 19.4% had someone living alone who was 65 years of age or older. The average household size was 1.98 and the average family size was 2.48. 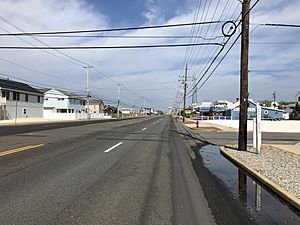 For Kindergarten through sixth grade, public school students attend the Long Beach Island Consolidated School District, which serves students from Barnegat Light, Harvey Cedars, Long Beach Township, Ship Bottom and Surf City. As of the 2017–18 school year, the district, comprised of two schools, had an enrollment of 234 students and 33.1 classroom teachers (on an FTE basis), for a student–teacher ratio of 7.1:1. Schools in the district (with 2017-18 enrollment data from the National Center for Education Statistics) are Ethel Jacobsen School in Surf City with 111 students in pre-kindergarten to second grade and Long Beach Island Grade School in Ship Bottom with 125 students in grades 3 – 6. The district's board of education is made of nine members who are directly elected from the constituent municipalities on a staggered basis, with three members elected each year. Of the nine seats, four members are elected from Long Beach Township.

Students in public school for seventh through twelfth grades attend the Southern Regional School District, which serves the five municipalities in the Long Beach Island Consolidated School District, along with students from Beach Haven and Stafford Township, as well as students from Ocean Township (including its Waretown section) who attend as part of a sending/receiving relationship. Schools in the district (with 2017-18 enrollment data from the National Center for Education Statistics) are Southern Regional Middle School with 944 students in grades 7–8 and Southern Regional High School with 1,941 students in grades 9–12. Both schools are in the Manahawkin section of Stafford Township.

At the time of its founding in 1957, the Southern Regional School District had a roughly equal number of students from Long Beach Island and Stafford Township. By 2016, the overwhelming majority of students were from Stafford Township, accounting for nearly 90% of enrollment. These demographic changes have led to significant discrepancies in the cost per pupil sent to the district from each community, with Harvey Cedars and Long Beach Township paying more than $200,000 per pupil, while Stafford Township's costs are $3,600 for each student. These widely different costs result from a formula that uses the taxable property value in each municipality to apportion costs, which means that municipalities with relatively high property values and small numbers of students pay a higher share of total district costs. Some residents of Long Beach Island communities are seeking to amend the formula to take advantage of a 1993 law that allows districts to use both property value and enrollment to allocate property taxes, though that would require passage of referendums in each municipality.

St. Mary Academy near Manahawkin CDP, a K-8 school of the Roman Catholic Diocese of Trenton, is in the area. From 1997, until 2019 it operated as All Saints Regional Catholic School and was collectively managed by five churches, with one being St. Francis of Assisi Church in Brant Beach. In 2019 St. Mary Church in Barnegat took entire control of the school, which remained on the same Manahawkin campus, and changed its name. The other churches no longer operate the school but still may send students there.

All content from Kiddle encyclopedia articles (including the article images and facts) can be freely used under Attribution-ShareAlike license, unless stated otherwise. Cite this article:
Long Beach Township, New Jersey Facts for Kids. Kiddle Encyclopedia.