Lusk is a high-plains town in the eastern part of the state of Wyoming. The town is the seat of Niobrara County. The town was founded in July 1886, by Frank S. Lusk, a renowned Wyoming rancher, partner in the Western Live Stock Company, and stockholder in the Wyoming Central Railway. Cattle ranching remains the primary industry in the town of Lusk.

The Black Hills Gold Rush brought fortune seekers to the Wyoming Territory. Within two years, the stage coach route between Cheyenne, Wyoming and Deadwood, South Dakota delivered freight, including salt pork and whiskey. The boom also brought armored stage coaches and gold bricks, along with Indians and thieves. The Cheyenne–Deadwood route operated from 1876 to 1887, when it was replaced by the Wyoming Central Railway.

Frank S. Lusk (1857–1930) was a renowned Wyoming rancher and stockholder in the Wyoming Central Railway. Initially residing in Cleveland, Ohio, he moved to Denver, Colorado in 1876 and built the Western Live Stock Company under a partnership agreement and established a ranch east of Greeley. In 1877, Lusk traveled to the Wyoming Territory for the first time on personal business and left highly impressed with the people and the area. In 1879, eastern Colorado had grown to the point that Lusk, along with his partners began exploring options outside of the area. His thoughts were recorded in the 1923 Annals of Wyoming: Quarterly Bulletin:

My partners were favorable to moving into eastern Colorado near the Nebraska state line but I remembered the people I had met earlier in Wyoming and those I had subsequently met were a fine class of people and I decided we would go to Wyoming.

Lusk and the Western Live Stock Company arrived in the Wyoming Territory in 1880 via Denver, establishing the Node Ranch, about 15 miles (24 km) east of present-day Lusk. A year later, he bought some land about 3 miles (5 km) outside of Lusk, which included the Running Water Stage Station. Buildings on the land included a stone barn and shelters that had been used by the Cheyenne–Deadwood stage route. Lusk established a hay ranch on the property. He organized his horse ranch at the site of what would later become the town of Lusk. 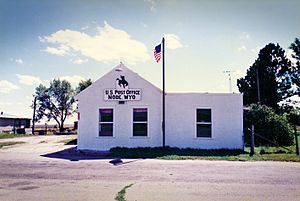 After establishing his three ranch properties, it became clear that the nearest post office was located in Rawhide Buttes, 15 miles (24 km) southeast of the hay ranch, actually Route 20. Collecting the mail required a ride of 40 miles (64 km) round trip. In response, one of the partners in the Gilmer and Salisbury Express Stage told Lusk that he should set up a post office at the ranch, which would provide for delivery of the mail, rather than requiring him to make the ride to Rawhide Buttes. When Lusk sent in the application to the Post Office Department, everything was complete, but he didn't indicate a name for the post office. When asked about it later, Lusk told the star route representative that he was "busy and told him to do whatever he thought would, without a doubt, establish a post office for us. He told me he had suggested that it be called 'Lusk' and in due course of time it was so established".

In 1886, the Fremont, Elkhorn and Missouri Valley Railroad wanted to extend their line west from Nebraska toward Casper, Wyoming, in order to transport coal. The territorial laws at that time required railroad companies to incorporate within the territory, before they were allowed to build or operate lines in the area. In order to meet the requirements allow construction and ownership, the Wyoming Central Railway was established as a dummy corporation. While Frank Lusk had been a successful cattleman, he was named as a director and only resident stockholder of the company. Letters of incorporation listed the base of operations as Lusk, Wyoming.

While Lusk was the only post office in Wyoming on the entire (proposed) line and was named as the place of business of the company in its incorporation papers, it wasn't officially established until July of that year, when railroad engineers laid the first plat for the town. That same year, the towns of Douglas, and Casper were officially established in the same manner by Lusk, on behalf of the Wyoming Central Railway.

After the turn of the century, there was another mining boom. Silver was discovered in the hills surrounding Lusk, which brought a steady stream of miners to the area. By the 1950s, growth in the area stabilized when cattle ranching usurped mining as the primary industry of the town.

There were 658 households of which 22.6% had children under the age of 18 living with them, 44.2% were married couples living together, 9.3% had a female householder with no husband present, 3.2% had a male householder with no wife present, and 43.3% were non-families. 39.5% of all households were made up of individuals and 18.1% had someone living alone who was 65 years of age or older. The average household size was 2.06 and the average family size was 2.75.

There were 611 households out of which 27 percent had children under the age of 18 living with them, 50.7 percent were married couples living together, 8 percent had a female householder with no husband present, and 37.5 percent were non-families. Individuals living alone accounted for 35 percent of all households and 17 percent of those living alone were over the age of 65 years. The average household size was 2.2 and the average family size was 2.84. 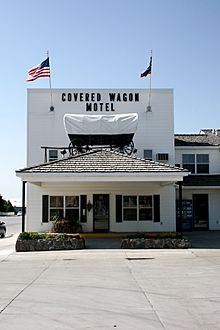 Museums and points of interest

While the Parks Department offers recreational opportunities through the golf course and swimming pool, the Lusk Recreation Department offers competitive and noncompetitive sports programming for both youth and adults. Summer leagues include adult coed softball, and youth baseball and soccer. The department also presents a summer Art in the Park program.

The Parks and Recreation Department maintains the town swimming pool and three parks, including Washington Park, Northside Park, and Audrey Park. Open May through October, all the parks offer playground equipment. The swimming pool, known as "Lusk Plunge", is located at Northside Park. The department also maintains the nine-hole Lusk Municipal Golf Course. Opened in 1942, the course is located west of the town on Highway 273 and offers several tournaments a year.

All content from Kiddle encyclopedia articles (including the article images and facts) can be freely used under Attribution-ShareAlike license, unless stated otherwise. Cite this article:
Lusk, Wyoming Facts for Kids. Kiddle Encyclopedia.