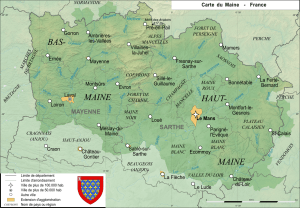 Maine is one of the traditional provinces of France. It's capital was the city of Le Mans. The area is now divided into the departments of Sarthe and Mayenne.

The Carolingians called Maine pagis cenomannicus after the Cenomani tribe that Julius Caesar had defeated. Pepin the Short gave the duchy of Maine to his half-brother Grifo. In the last half of the 9th century, Maine took on greater importance because of invasions from Normandy and Brittany. In 924 King Rudolph of France gave Maine to Rollo of Normandy. Because it was next to Anjou on the south and Normandy on the north, these two duchies often fought over Maine.

William, Duke of Normandy invaded Maine in 1063 and he controlled the county by the beginning of 1064. Norman control of Maine helped make the southern border of Normandy safe against Anjou. This was a factor which allowed Duke William to launch his successful invasion of England in 1066.

In 1069 the citizens of Le Mans revolted against the Normans. Soon some of the Manceaux barons joined the revolt. The Normans were expelled in 1070, and young Hugh V was made the Count of Maine. After Norman attacks in 1073, 1088, 1098 and 1099, Elias I succeeded his cousin Hugh V, who sold Maine to him in 1092 for ten thousand shillings. His daughter married Fulk V, Count of Anjou, who took Maine over in 1110 after the death of Elias. Henri Beauclerc, agreed to recognize him as Count of Maine.

Fulk's son Geoffrey V, Count of Anjou inherited Maine. In 1051 it passed to Geoffrey's son Henry, Duke of Normandy (later King Henry I of England). Anjou, Maine and Normandy now had the same ruler for the first time. Henry later founded the Plantagenet dynasty in England.

The King of France, Philippe Auguste attacked the Plantagenet holdings called the Angevin Empire when it was held by John, King of England. In 1331 the Count of Maine became a peer of the realm.

After the battle of Verneuil in 1424, the English occupied Maine. They held Le Mans until 1448 and Fresnay until 1449. In 1481, Charles V of Anjou left his lands to Louis IX of France. This act returned the county to the crown of France.

All content from Kiddle encyclopedia articles (including the article images and facts) can be freely used under Attribution-ShareAlike license, unless stated otherwise. Cite this article:
Maine (province) Facts for Kids. Kiddle Encyclopedia.