Maltby is a former mining town and civil parish of 16,688 inhabitants (2011) in the Metropolitan Borough of Rotherham, South Yorkshire, England. It was historically in the West Riding of Yorkshire. It is located about 6 miles (10 km) east of Rotherham town centre and 10 miles (16 km) north-east of Sheffield city centre. It forms a continuous urban area with Hellaby, separated from the rest of Rotherham by the M18 motorway.

Maltby is mentioned in the Domesday Book as "by-malt", and was for centuries a very small village with the benefits of a fairly large stream nearby and very rich land for farming available. Roche Abbey, on the outskirts of Maltby, was founded in 1147 by Cistercian Monks from Newminster (near Morpeth, Northumberland), and was ruined during the Dissolution of the Monasteries in the reign of Henry VIII.

Coal was discovered in the area in the late 19th century; the last colliery in Rotherham was Maltby Main Colliery, established 1910 and faced with closure in March 2013. To house the colliery's workers, the colliery company built a large estate known as the 'Model Village' to the east of the town centre.

From 1900 until 1929, the town was served by Maltby railway station on the South Yorkshire Joint Railway, with services running between Doncaster and Worksop. The station's platforms still remain and the line is an important freight route. John Brown's Private Railway also ran by the west of Maltby, but the track has been lifted and is now a public footpath; a short stretch of track and a platform remains. 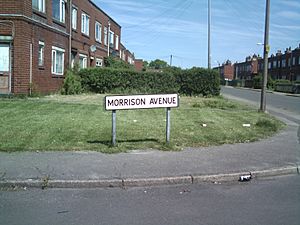 During the Second World War, a munitions factory, ROF Maltby, was established on the outskirts of Maltby close to the colliery; to house these workers, an estate nicknamed 'Little London' was built to house its workers, who had moved from Enfield in London.

Maltby also had a knitwear factory, Byfords, which supplied companies including Pringle – this has long since closed, and a police station was built on the site.

Maltby's main council housing stock went into serious disrepair during the 1980s with areas like "White City" and the "Tarran estate" (now demolished) worst affected. Since Maltby began to benefit from local government funding in 1997, council estates such as White City and Birk's Holt Drive have been rejuvenated and refurbished. New council housing was opened in 2011 on the site of the former Tarran estate. 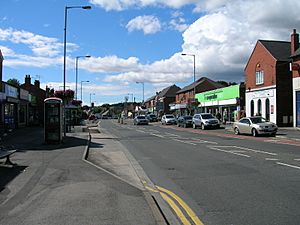 Before coal was discovered in the area, Maltby was a small agricultural village, centred on the Parish Church of St Bartholomew's (ref Domesday Book / Saxon Tower), with a population of around 500 at the start of the 1900s. With the opening of the mine in 1907 miners came from all parts of the UK – Wales, Staffordshire, Durham, Scotland and Ireland (the latter descendants of the canal (navvies) and railway building). The miner's Model Village was built with its centre piece as the Church of the Ascension, an annexe to the Parish Church, and in addition a significant presence of Methodist, Congregational, Salvation Army and Roman Catholic places of worship developed. The new community spawned several working men's clubs, including the 'Stute' (short for the Miner's Welfare Institute), the 'Slip', the ROF Club (Royal Ordnance Factory) and Catholic Club. The most significant sports clubs were the Miner's Institute ('Maltby Main' – football and cricket) and Roche Abbey Cricket Club, where Freddy Trueman commenced his illustrious career.

The town is served by a variety of shops and businesses. There are several public houses in the town, the oldest of which is the White Swan which dates from the 16th century.

Maltby Academy on Braithwell Road (B6376) is a secondary school which serves the town and some surrounding villages. It was previously known as Maltby Comprehensive School until receiving academy status in 2010. Permission was granted in 2012 to rebuild the school, to the opposition of some residents.

Initially however, the 'campus' comprised Maltby Grammar School and Maltby Hall Secondary Modern School built on the site of Rolleston Hall. The Grammar School was built in 1931 through the enterprise of County Alderman Dunn, a miner and Labour Councillor, and survived through to the 1970s, guided throughout by the Headmaster, Gerald Rush, pupils being drawn from the adjacent mining towns of Dinnington, Thurcroft, Edlington and Rossington, plus Wickersley, Bramley, Laughton, Tickhill, Bawtry and smaller villages of Braithwell, Micklebring, Anston, Austerfield and other smaller settlements. The Grammar School period architecture survives today with its imposing front and iconic clock set high above Rotherham Road.

The ancient game of "beck ball" was revived in the mid-1980s to some success; this is a sort of rugby game, where opposing teams generally fight a turf war in the local stream, Maltby Dike – or Beck as locally known. This stream runs through the valley past St Bartholomew's, thence past Maltby Crags, through the Norwoods, through the centre of Roche Abbey, emptying into the River Ryton at Blyth a few miles downstream. Below Maltby, the stream has also been referred to as the 'Comwell'. Near to Roche Abbey is Sandbeck Hall, the home of the Earl of Scarborough.

Despite the rebuilding/refurbishment of some housing stock at the beginning of the 21st century, the ward of Maltby, particularly the eastern area, (in 2010) included areas of high deprivation, according to data generated by the Department for Communities and Local Government.

The town lies in the South Yorkshire constituency of Rother Valley, currently held by Labour MP Kevin Barron, a seat which he has held continuously since 1983.

The town is served by high frequency (every 10 mins during the day) buses the X1 SteelLink service to Sheffield runs via Rotherham town centre, and the Meadowhall Shopping Centre. Also service 10 which runs every 30 mins daytime from Rotherham to Doncaster via Rotherham Hospital and Maltby all run by First South Yorkshire. It is situated close to junction 1 of the M18 motorway, allowing quick access by car for commuters to Sheffield and Doncaster, plus the A631 road runs through the town linking it with Rotherham town centre. 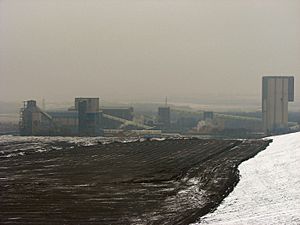 Sinking of the original shafts of Maltby Colliery began in 1907, as part of the development a large estate known as the "Model Village" was constructed as housing for the colliery workers.

An explosion in the colliery occurred in 1923, resulting in 27 deaths. Maltby Main pit was the site of mass picketing during the '80's miners' strike, which lasted almost exactly a year from March 1984 to March 1985, and the pit was the last to return to work when the strike ended. Post nationalisation the pit was sold to RJB Mining (later known as UK Coal) in 1994, and later to Hargreaves Services in 2007.

After encountering geological problems when trying to access a new coal seam, colliery owner Hargreaves announced that on health and safety grounds the mine would have to close. Maltby Colliery closed in March 2013, with a march held by former miners and residents of the town to mark the occasion.

The Miners' Welfare Institute (locally known as the "stute"), a working men's club for miners, is still open to this day.

All content from Kiddle encyclopedia articles (including the article images and facts) can be freely used under Attribution-ShareAlike license, unless stated otherwise. Cite this article:
Maltby, South Yorkshire Facts for Kids. Kiddle Encyclopedia.