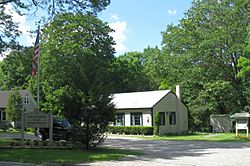 Headquarters of Long Island Central Pine Barrens in the community

Manorville is a hamlet and census-designated place (CDP) in Suffolk County, New York, United States. The population was 14,314 at the 2010 census.

Manorville is served by the Eastport-South Manor Central School District and is mostly in the Town of Brookhaven, but its northeast corner is in the Town of Riverhead.

The hamlet is at the western edge of, and partially within, the Long Island Central Pine Barrens. The land is heavily wooded, and features some wetlands, particularly in the northern section near the Peconic River. Much of the northeastern portion of the hamlet is in the Pine Barrens' "Core Preservation Area", where no further development is allowed. This area also serves as a primary source for Long Island's groundwater preserve.

Manorville is in the center of Long Island with no access to the water. It lies partially on the Ronkonkoma terminal moraine, which creates some slightly rolling topography, especially in the central portion of the hamlet. The glacial topography of the area features several kettle hole ponds, the most well-known of which is Punk's Hole, where a Revolutionary War captain was rumored to have hid from the British.

The hamlet of Manorville was a small farming community for many years. The area of the hamlet once laid within the huge tract of land known as Manor St. George, a land grant given to Col. William "Tangier" Smith in 1693 for recognition of his service as governor of Tangier in Morocco. In 1844, the Long Island Rail Road built a station called "St. George's Manor", which was situated off of Ryerson Avenue. However, Seth Raynor, the station agent who was a patriot during the American Revolutionary War, disliked the name due to its similarity to the British and their colonial dominance (St. George, the patron saint of England, is a symbol of the English monarchy), and decided to paint over the sign, leaving only the word "Manor". The hamlet changed its name to "Manorville" with the opening of its post office in 1907, but timetables and Long Island Rail Road documents retained the name "Manor" until 1907 or 1908.

On April 9, 2012, several brush fires ignited over 2,000 acres (810 ha) of woodland around Manorville, Ridge and Brookhaven. The fires were intense enough to cause closure of parts of the Long Island Expressway and, as of 5:00 PM that evening, parts of Riverhead were placed under mandatory evacuation. The brush fires burned about 1,124 acres (455 ha) of pine lands and about 600 firefighters from about 109 fire departments battled the fire with 30 brush trucks, 20 tankers, and 100 engines. Airdrops of water were made by a State Police helicopter that afternoon.

There were 4,122 households out of which 36.4% had children under the age of 18 living with them, 63.4% were married couples living together, 5.9% had a female householder with no husband present, and 28.7% were non-families. 24.4% of all households were made up of individuals and 9.6% had someone living alone who was 65 years of age or older. The average household size was 2.69 persons and the average family size was 3.25 persons.

All content from Kiddle encyclopedia articles (including the article images and facts) can be freely used under Attribution-ShareAlike license, unless stated otherwise. Cite this article:
Manorville, New York Facts for Kids. Kiddle Encyclopedia.